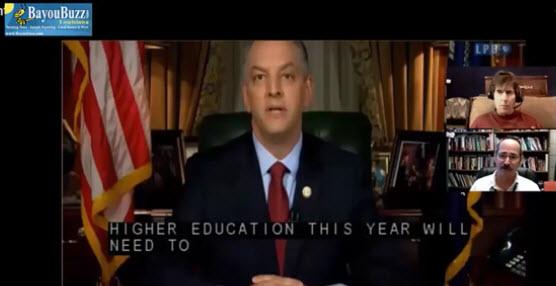 On Thursday night, newly elected chief of state, Gov. John Bell Edwards, addressed the citizens in a televised speech outline the problem and his recommendations.  According to Edwards, a popular program for students, call TOPS, has run out of money. Worst, universities and colleges will need to shutter.  And even worst for some, the LSU football program and other programs would need to close for the year.

SABLUDOWSKY: So you heard the governor yesterday and I'm assuming you heard or read the GOP response, Treas. John Kennedy, overall why don't you tell us where do you think we stand right now in terms of the budget

ED CHERVENAK: I think it is difficult to say, certainly, I think the governor offered some transparency and honesty, pretty much laid out a doomsday scenario, catastrophe for higher education which is pretty much expected so I think that it was an effort to get people to communicate with their representatives that something needs to be done. That what we've done over the last eight years hasn't worked. The state is in a ditch and now we've got to find a way to get out.

SABLUDOWSKY: So TOPS, first of all, apparently the state has decided to stop paying the universities for TOPS.  Some people think this is a scare tactic, some people say-- this is just a way to get the Republicans to be scared and others are saying, "wait a minute, TOPS is really doing some great things, why in the world would we even think stopping that program, why don't we stop another program such as food stamps for those who make no attempt to find work. Your response?

ED CHERVENAK: think that TOPS is in default and so basically the University is to stop billing TOPS which means, at least for the state colleges we're going to have to absorb those costs.  That's already a budget cut for us.  This also applied to some of the private schools, I was talking to Silas Lee and a number of his students are on TOPS-- that means the basically the students are going have to absorb those dollars, not the universities, I don't know--probably not, I don't know, but that's just kind of my thinking...it has reached the point, there the money is gone, there is no way to replenish the budget because all of the rainy day funds, all of these set-asides have already been depleted.

I don't know if the governor is using this for a scare tactic, or not, if he is is probably a effective tactic because TOPS is a popular program throughout the state.  the problem is, the costs continue to rise, with increased tuition, which means the state will have to increase money available for TOPS scholarship--so we're kind of that impasse and so it means that higher tuition and more out-of-pocket expenses for families, .  It means that we just going to reach a point where we just can't, basically, we're out of money, it's time for some new revenue or some cuts elsewhere to replenish the TOPS scholarship

SABLUDOWSKY: Okay want to tell us if you don't mind, what is going on, on campus the standpoint of the students, from the standpoint of fellow professors, instructors, etc. I would imagine that everybody is walking around with a big question mark over their heads?

ED CHERVENAK: We've been doing this now for several years now, however education has been taken the brunt of these cuts for number of years, going to say that, we’re used to this, but it does take a psychological toll, certainly you don't, you never know what's gonna happen from one day to the next. You see people who are basically deciding to go elsewhere, losing a lot of good professors just don't think that this is a secure environment for them to work and come and they are going to other states providing them with the resources. In many of these people are researchers, they had grants in there taking those grants with them. And so, seeing a brain drain faculty in higher education, here. You can't hire people, we keep losing people, we can't hire, and from my experience had 12 people in my department and now down to four people and it becomes much more difficult to sustain a program with we can't offer all the students these various courses to meet degree requirements so that is just our experience in it seems to be a downward spiral and it's hard to envision us getting out of this in moving forward.

SABLUDOWSKY: Okay, let me go in play will be more of them the speech.

SABLUDOWSKY: Okay we could go on, is definitely describing a doomsday scenario even to the point where he's thinking about shuttering some of the, with the implication, to the LSU Tigers, football season, and Les Miles bleeds “purple and gold” and has a bumper class of freshmen coming in. Is there a chance with this kind of talk, some of this people are going to say, wait a minute, I'm sorry, “I can't keep this commitment to the LSU program” so I guess my question is--couple questions, number one--who loses with this kind of conversation? Does the governor lose by scaring people, according to some--scaring people to the point where maybe we lose some of the top players in the country

ED CHERVENAK: We have to remember that LSU is a University first, the needs of students first, and they are athletes second and if it comes to this doomsday scenario we won't be able to pass students from this semester on to the next semester is just impossible because it won't have the accreditation, they want the grades. The football program is basically self financing. Les Miles salary doesn't come out of the state budget, it comes out of the athletic budget and all scholarships for the football program comes out of the athletic budget would really hurts is all your sports

For example, LSU baseball, there reliant on top scholarships for particularly in-state recruits. They can offer so many scholarships to out-of-state athletes and so there relying upon TOP scholarships for in-state athletes and get those top scholarships are gone and held to much difficult, great difficulty in creating in-state.  As far as it being a  scare tactic, people aren’t used to having this kind of rhetoric coming from the governor, over the last few years, all we heard was nothing but “fairytale hopes and fantasies” from the Jindal administration about how great things were and now, being told how terrible things are, and so it's an abrupt change

So the governor is using his bully pulpit, is basically communicating to residents that I can-we’re in a very serious situation. Some people can be turned off by the extreme rhetoric but these are very unique times and there is just a sense of urgency that he is just trying to communicate.

SABLUDOWSKY:: Okay, so here's one of things that he said, and this is one of things that just kind of confuses me, he saying, "hey, if will start acting upon this going to start running out of money" I think he said by the end of March? Am I correct?

SABLUDOWSKY: Okay so, we're talking about that point, the beginning of the regular legislative session. I know that you have heard, or at least I assume that you have heard, I know that I have read people say that some of the Republican leaders want to just shut down the special session, do nothing at all, take it all up during the regular session which starts in March, assuming that's what happens, I believe it starts in mid-April or the latter part of March I would have to check the dates, nevertheless, that doesn't make any difference, the bottom-line--laws that are passed do not get enacted until weeks after, bills don't get, bills that are passed don't get enacted, so the legislature is not going to do anything and just calls itself out of session and pick it up again in late March, April, not have any money for the campus. Assuming the governor is telling us the truth here, that doesn't sound to me like a pretty viable solution

ED CHERVENAK: No it's not a viable solution. It's not a responsible solution. We spent about $750 million in higher education, and looking at about $950M budget deficit, so basically, what it means is that there will be no money at all for higher education. We have suffered these midyear cuts every year and basically we would just be saying, as well, "would just not going to be investing in higher education" and so would not serious about higher education. How do you attract businesses when you show businesses that you're really not interested in our education, not serious about dealing with the budget deficits.  Louisiana will continue to be perceived as as a backward state but just can't seem to do anything right

SABLUDOWSKY: Okay, let's hope we get it right, for sure, we have our work cut out for us