Politico hails Mitch Landrieu No. 18 and a for voice to rectify history Featured 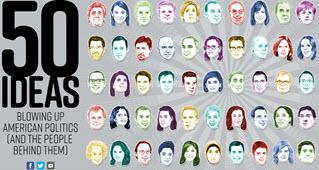 Let it be said: New Orleans Mitch Landrieu has angered many in New Orleans and Louisiana with his recent controversy over taking down the confederate monuments.

He has been the brunt of insults due to his leading a city known not only for its gumbo but its daily killings. He's been the target of countless epitaths due to a recent city flood caused by woefully inadequate water draining.  But, in the minds of those in the national media and elsewhere USA, he has gotten his name and his brand to perhaps his next consumer or possibly, voting audience.

This week, Mitch Landrieu was picked 18th out of 50 for Politico's "Blowing Up American Politics and the People Behind Them" list, just published.

Landrieu is in interesting company.  Number one on Polico's "blow up" list is the notorious Steve Bannon, who certainly has not been the darling of the mainstream media or the "swamp". Weighing in at number eight is Sally Yates, who gained national prominence for being fired by President Trump. The number ten spot went to Prime Minister Merkel of Germany, whose sneering glances would blow to smitherings just about anybody standing in her way, or next to her, shall we say.

Then, again, number 18, Landrieu, who has been touted in national media as a possible presidential candidate.

Mitch Landrieu has one of those flows-like-the-Mississippi accents that comes from deep New Orleans roots. In high school and college, he thought about a career in musical theater. But he’s never been famous as an orator.

Then, in May, the mayor surprised everyone with a riveting speech explaining why he had decided to remove four monuments to the Confederacy around the city. “I want to try to gently peel from your hands the grip on a false narrative of our history that I think weakens us,” Landrieu said, “and make straight a wrong turn we made many years ago.” It wasn’t the first time a politician had done away with symbols seen by many as remnants of a racist past, and Landrieu was certainly urged on by activists. But he was out front on the battle over Confederate monuments that has exploded into a national issue this year, dealing with his city’s statues quickly and sensitively. (“I must have passed by those monuments a million times without giving them a second thought,” he said, “so I am not judging anybody.”) Within a few days, Landrieu’s speech took off nationally, too: Videos went viral on Twitter, excerpts were played on cable news and the New York Times published the transcript in full.

Landrieu, obviously is quite pleased with the mention and the attention. via twitter. Politico tweeted, "No. 18 on this year's #Politico50: @MayorLandrieu, a voice for rectifying history". The New Orleans Mayor responded with--"Thank you @politico @POLITICOMag for the recognition. I stand on the shoulders of so many who have sacrificed & been courageous in NOLA."

Politico hails Mitch Landrieu No. 18 and a for voice to rectify history

More in this category: « U.S. Virgin Islands's Governor Mapp guns to repeat New Orleans Katrina's sins Landrieu's cry to US Mayors and Governors, "Tear down those confederate monuments" »
back to top