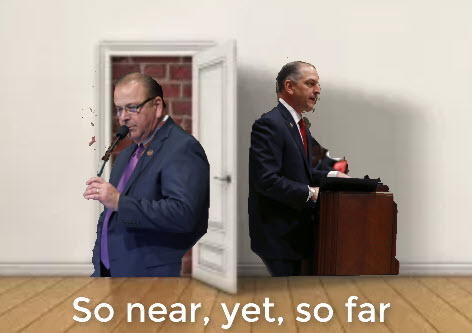 Which, in essence was the question I asked the political analyst, radio talk show host and reporter Christopher Tidmore, who has very insightful views as to what occurred and what might develop in the future.  How in the world did we not get a deal in the two week session that just expired with an incomplete grade, at best, at worse, an F?  Where do we go from here?

Below is a segment from the video interview via Facebook Live and Twitter Live. This part began at the 28 minute, 24 second mark and ends at the and ends at the 35 minute 57 mark.

Do watch the entire video from the very beginning. We will be posting the last part of our discussion, tomorrow.

Note: At the time of the live show, Governor John Bel Edwards had not release his legislative call for a third fiscal session and fourth legislative session of the year.

TIDMORE: So, in fact part of the reason everybody funded healthcare in the budget and that was the one thing that was chosen, it was the one element that people would feel immediate pain if we did not fund it now.  Because the, all the hospitals that have the public-private partnerships, charity hospitals had said very bluntly from UMC to Lafayette General to others they would have laid off people.  They were gonna start laying off and they were gonna moved their contracts, they were gonna walk away,  So that was the major worry

SABLUDOWSKY: But universities now, have, I mean the burden right now is the universities,  so where are we right now? I mean, there is at least, there's appropriations but there's-- the governor may go ahead and do that right?

TIDMORE: He could. I don't think he will, but I could be wrong.

SABLUDOWSKY: He did it last time

TIDMORE: He did it last time but that that budget was fundamentally different. That budget last time cut healthcare and that's the major Democratic priority.  This budget doesn't cut health care,  but it cuts everybody else. Here's the thing, well I'll into this--if the governor vetoes this budget, then you go back to the drawing board or the legislature overrides this veto one or the other.  We haven't overridden a governor in two decades.  It's a ridiculous thought, in Louisiana.  Other states, maybe not here.  So then you have to draw up a budget--that means a lot of these funding propositions would not be done until the end of the fiscal year on the 30th, and I mean in a already dangerous situation it's even more dangerous.  If I'm the governor, I see the my major immediate priority health care, already funded. I see the TOPS program which is the thing Republicans want to fund completely, tied to funding every other department--if they will vote for the tax, I want.  So if I'm the governor I'm like whoa--why would I veto this.  I will get everything I want or they will feel the pain just like my people will feel the pain.  It doesn't make a whole lot of political sense-- that meaning Governor John Bel Edwards sometimes doesn't do things, and this is a compliment in a matter of speaking, strictly based on political ideology.

If he, from a standpoint, he doesn't like this budget, he wants a fully funded budget and he vetoes, that he might roll the dice, he's done it before. I,  my guess is the politically smart thing to do from this position is to sign the budget the law and say okay come up with an extra five hundred and fifty million dollars or you're gonna have your college-age constituents saying how dare you--my kid can't afford college his tuition payment is down by 30%.   iI this budget had not done the pro rata share where it basically said any money we get in will fund TOPS first, yeah there would be a real reason for governor Edwards to veto this budget, if we make it would be that's not what it say

SABLUDOWSKY: okay alright so I mean that's that's a pretty substantial purchase a lot of people don't engage in during a year so--look at it like that I mean if you basically you're suggesting that, i'm not suggesting you personally--but the legislature at this point is suggesting that we deny education and we put prisoners out on the street,  we delay the courts, which already gets delayed by so much as it is, because we want to protect $65 or whatever $57 for sixty five thousand dollar ca-- the average person making twenty five thousand as I understand pays $,7 that person making seventeen thousand, I'm sorry 25,000 pays $17 a year--I mean just from a pure understanding, I totally understand, hey enough is enough,  but if you just look at the numbers, I mean we're talking about for some people the cost of the price of a dinner or maybe even a tip.  I mean you know there's something really wrong with the fact that the legislature cannot get together and resolve the difference of this minor nature and do you think that that perhaps what's going on right now is they're trying to get this together so that they can call a session and basically just put-- nominally call session, because you can't just go through this again. You can't over something so minutely different.

TIDMORE: I answer this in two ways the minute difference between a third of a penny and a half of penny is unarguable.  It's not even, for the poorest of people, it's not that much money. Having said that, you've got to accept that the Republicans who voted for the third of a penny already feel like they went and they put their reelection in danger, so the question comes to the governor's office

SABLUDOWSKY: But the Democrats are also doing that in terms of sales taxes

TIDMORE: Yeah but black members of the Black Caucus, specifically share the risk, as well.  But here's the thing--you're not, if you're a black caucus member while there's gonna be anger in your district and I write for an African-American newspaper, I cover this very closely--when it comes to saving hospitals and other government programs, while there's gonna be anger over--why couldn't you get a better deal--on income taxes, most of the black caucus members are not going to lose their seats or lose their next election based on voting for a half a penny or 1/3 of a penny.  It's not ,it's it's a principle thing that if those who vote against it. It's not gonna have a political impact mostly there could be exceptions.

for Republicans it will. So the way I answer your question is with a question--to overcome this 115-180 million dollar difference which is what we're sent talking about, that would fund TOPS, prisons everything else-- what concession will the administration make to the Republicans that they can go back to their constituents and say I know you hate this.  I know you hate me for voting for it--will you do it?

More in this category: « And even another Louisiana fiscal session "food fight" over budget scraps Governor Edwards, liberals tax and spend policies cost jobs, economic growth »
back to top