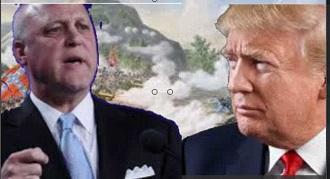 Representing the gray, Trump is reeling from an national emotional controversy involving the KKK, Nazis, Confederate statues, Antifa and protests including a riot and killing in Charlottesville Virginia.  Trump who is not unfamiliar with the art of the battle is at the center of a racial fog. This one has caused members of the Republican Party and top CEO’s in the US to rebuke him.  As a result, to maintain his base and to bring back some of the deserters, the President has taken a different tack—American history.

At a heated press conference early this week, Trump tried to turn the argument against his not forcefully distinguishing the violent white haters from violent protesters. The shrewd turn  is trying to morph the riot involving white nationalists and surpremacists into one involving history and the Confederate monuments.

Both he and his lawyer have compared Robert E. Lee to George Washington, both slave owners.

Today, he tweeted the issue twice:

Sad to see the history and culture of our great country being ripped apart with the removal of our beautiful statues and monuments. You.....

“..can't change history, but you can learn from it. Robert E Lee, Stonewall Jackson - who's next, Washington, Jefferson? So foolish! Also...”

Representing the blue is Mitch Landrieu. The Mayor has been knee deep in battling his own storm resulting from inadequate flood protection and sewage after a recent monsoon that inundated parts of New Orleans.  He likewise would prefer to swim far away from the disaster and high-controversy engulfing his administration in what appears to involve acts of gross neligence on the parts of certain officials.  Being the first Mayor to push for the removal of Confederate monuments, the response has been brutal. The very last thing he needed was an attack from the flank, which is exactly what occurred when the skies dumped its wet carnage upon large swaths of water damage to many homes and businesses.

Many whites, in particular, have been outraged about Landrieu's push to take down three Confederate monuments earlier this year.

Today, in somewhat of a war cry and acting in his role of President of the US Conference of Mayors, Landrieu penned a letter to other mayors for a national push to follow his lead and forever removing the civil war edifices from city landscapes.

Some believe Landrieu is trying to obtain the limelight nationally for a presidential run.

Here is the Landrieu letter:

Throughout our nation’s history, mayors have led the charge opposing all forms of racism and discrimination. From the start of the civil rights movement, to the fight for equality for LGBT residents, to the ongoing battle to build more equitable and cohesive communities, we have always stood on the side of compassion and inclusion.

In 1963, President John F. Kennedy asked our conference to lead the country toward racial reconciliation and civil rights. He called on mayors to help him provide every American “a fair chance to develop in full whatever talents he has and to share equally in the American dream.” This is our history and our legacy and our beacon forward.

Today, we find ourselves at a moment of truth. Once again, mayors have been asked to fill a void of national leadership. The horrific scenes that unfolded in Charlottesville, VA should stop us in our tracks as a nation and force us to focus on what they reveal about who we are, who we want to be, and how we get there.

Like many of you, I recently directed my administration to explicitly confront some complicated racial legacies in my city. We have seen firsthand the challenges of these actions, but also embraced the transformative benefits. I hope our combined efforts have put us on a path toward equity and reconciliation. But no matter how America navigates these troubled times, the courage and conviction of our cities will ultimately chart our course.

Let’s be clear: this is a choice.  Our country cannot ever be great if we are not good.  There should be no place in our country for bigotry, hatred or violence against those who seek to unite our communities and our country.

We know why symbols of the Confederacy were originally erected in our cities. They are not just innocent remembrances of a benign history. They were part of a deliberate effort to glorify the history of a movement based on terror and subjugation. For decades, they have stood in our public squares as monuments intended to celebrate a racist past and subjugate a brighter future.

Taking down monuments will not erase our history. The Confederacy’s shameful legacy will be with us, whether we memorialize it in marble or not. But as I said earlier this year, there is a difference between remembrance of history and reverence of it.  We must instead prove that we as a people are able to acknowledge, understand, reconcile and most importantly, choose a better future for ourselves, making straight what has been crooked and making right what was wrong.

As mayors, we have the ability to send a powerful message about the future we all want for our residents. This week’s events give each of us an opportunity to take stock of our administrations and ourselves. It’s a good time to make sure that we are maximizing every resource, and using every tool at our disposal, to build more equitable and secure future for the families we represent.

I encourage each of you to lead your community through a conversation on race and equity. This process can be painful, and I know it may feel like you’re choosing the path of most resistance. But your city, and our entire union, will be stronger for it.

Mayors have led this country through some of its toughest times. While the news and tone of the day feels dark, I’m confident we can once again rise to the occasion and lead America to a future we’re proud to leave our children.

I pledge to you today the full resources of the US Conference of Mayors to help you unite your community. As President of this conference, I will commit to do everything we can to stand up to those who seek to divide us and perpetuate hate. If you choose to do the same in your city, we will stand with you.

More in this category: « Crouere: Should Trump be removed, Charlottesville will be child's play Twitter: Donald Trump News Today: DACA, Houston, Comey, Pence »
back to top