Here's how Trump could pay for Mexican wall Featured 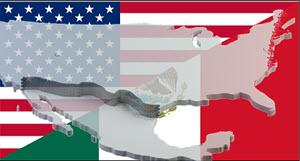 President Trump could build a wall and might make Mexico pay for it, indirectly, if he constructed it out of solar panels and wind turbines. Equip the turbines with infrared motion cameras and long range omnidirectional microphones. Where the border is sensitive, capacity for human observation decks can be built into the turbines. Drones, also, could be turbine based and the wall could be fitted with satellite run gyros to lift, and turn, panels to enable them to track the path of the sun for utmost efficiency.

Such a program would secure the border better than current fencing, be self-sustaining, provide additional security via a reflective skin, reduce American reliance on foreign oil, be good for the environment, and spawn untold jobs in the green energy sector. Pre-sales, or bond proceeds, from profits expected from government, or public-private ventures, could fund additional border enforcement agency personnel, give American consumers reduced energy bills, and enhance military initiatives yet to be developed.

Below: Discuss how Trump could pay for Mexican wall

Initially, this would mean buying the panels from China, or jump-starting an advanced American effort, perhaps in coal country. 90% of existing world solar panel production is Chinese, in no small part because China is choking on its own oil and coal related air pollution. A good reason to buy panels from China, until we ramp up a new home-grown industry, is because that kind of contract would give the U.S. enhanced leverage over North Korea and its stability challenged Dictator, Kim Jong Un.

The idea, also, would give the U.S. a tremendous advantage in future dealings with Mexico. President Enrique Peña Nieto is set to take his country’s government owned energy behemoth, PEMEX, private by selling off its assets. The initial auction of PEMEX will be private, followed by a series of public sales. A remainder of PEMEX, consisting of unspecified acreages, will remain within a new scaled down organization that will compete with, and be regulated like all other private companies.

PEMEX was formed by the nationalization of American and Dutch oil interests permitted under Mexico’s post-revolution Constitution of 1917. Americans, such as Edward Doheny, were responsible for the growth of the oil industry in Mexico. Peña Nieto’s motivation in nationalizing PEMEX is to attract foreign investment to Mexico, and to shift an oil based energy sector to one grounded in electricity generated by natural gas that is cheaper than coal and petroleum. PEMEX’s current value is estimated to be around $880 billion.

Congress could appropriate enough money to start prototype development of this project, or other similar multi-purpose approaches to border security.It’s the only way such a project can proceed without wasting American tax dollars.