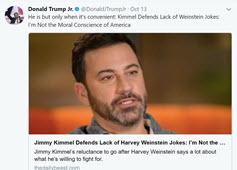 Time magazine ran a front-page photo of a saint-like Jared Kushner the week of June 1, 2017, identifying him as “The Good Son.”  When it published a cover with Donald Trump Jr., the identifier was “Caught Red Handed,” with a dark, moody, picture that resembled a mobster’s mug shot. The disparate treatment was extreme, though Kushner, so far, is unlikely to bring the Administration down.

Don Jr.’s off the books meeting, during the campaign, with Kremlin affiliated lawyer, Natalia Veselnitskaya, undoubtedly, prompted Special Counsel Robert Mueller to ramp up scrutiny of the President’s family. Don Jr. hasn’t been talking about Russia recently; surely, on advice of counsel, but that doesn’t mean he isn’t causing the President woe. Case in point is his twitter confrontations with late night talk show host Jimmy Kimmel, a critic of the President, on the topic of Harvey Weinstein.

Oscar winner Weinstein, founder of the Weinstein Company and Miramax Films, stands accused of thirty years worth of serial sexual misconduct. Though the allegations haven’t ever been adjudicated in civil or criminal courts, the filmmaker, so far, has lost his job, wife, and friends. The Academy of Motion Picture Arts and Sciences stripped him of membership, guilds are purging him, and authorities in London and New York are investigating him. Weinstein, purportedly, is headed to Europe for therapy; says he’s sorry; wants a second chance; and, claims he never forced anyone to consort with him, a claim several accusers dispute.

The voluntary involvement of Don Jr. in this tawdry business is deleterious to his father. Not content to smirk at the fall of a liberal lion, Don Jr. dared Kimmel to comment about Weinstein, who has been a frequent Democratic contributor. The blowback was predictable. Access Hollywood’s infamous Trump tape ran over, and over, again, prompting comparisons between allegations leveled against Trump with those against Weinstein.

When Gen. John Kelly became White House Chief of Staff one of his purported goals was to temper the President’s enthusiasm for confrontation and impulsivity. What may be the norm in the rough and tumble world of New York real estate, and tabloid notoriety, many people feel is out of place in the oval office. Don Jr. is not helping his father’s legal battles with his own intemperance, and is hurting the President across the boards. The family needs its own Kelly.

More in this category: « Fox's Cavuto joins Sen. Corker questions Trump's fitness, sound mind? Trump's imperfect union to the US Constitution and the truth »
back to top