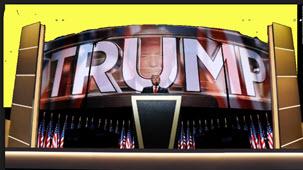 Trump at new low in poll

President Donald Trump’s job approval rating has declined to the lowest of his presidency.  Not only that, nearly half of voters favor Democrats to serve as a check and balance to Trump and Congressional Republicans in the 2018 elections.
That’s the finding of a new NBC/Wall Street Journal .poll conducted by Democratic pollster Fred Yang of Hart Research Associates and Republican pollster Bill McInturff of Public Opinion Strategies.
His current job approval rating of 38%, with  58% disapproving, is the lowest in modern times for a president at this stage of his presidency.