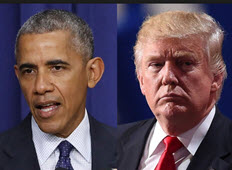 In 2017, the President has also enjoyed tremendous success in the civilized world’s ongoing war against Islamic jihadists. The terrorist group ISIS suffered tremendous losses in 2017 as the President unleashed our military to fight the enemy. In contrast to the previous administration, President Trump is allowing our military commanders to make battlefield decisions. We have also eliminated the restrictive rules of engagement that were hampering our success in fighting ISIS. As a result of these new measures, ISIS has lost 98% of its caliphate and is in serious decline. If this type of success had been achieved during the Obama administration, the media would be continually highlighting the story. Instead, this Trump administration achievement is the most under reported story of 2017.

The difference is that President Trump has been the target of an unrelenting media barrage while former President Obama was a press favorite. Throughout his tenure as President, the vast majority of the news media has been incredibly hostile to Donald Trump. According to the Pew Research Center, compared to his predecessor, President Trump received only one-eighth as much positive media coverage, but three times as much negative press.

In a year end interview with the New York Times, the President believes that the coverage will eventually turn positive and help him win re-election in 2020. According to the Trump, “Another reason that I’m going to win another four years is because newspapers, television, all forms of media will tank if I’m not there because without me, their ratings are going down the tubes…Without me, The New York Times will indeed be not the failing New York Times, but the failed New York Times.”

President Trump is certainly the politician that the media loves to hate. Amazingly, the negative coverage has not destroyed his approval ratings with the public. According to the latest Rasmussen poll, the President has a 46% approval rating, which is the same level that Barack Obama had at the end of his first year. The difference is that the media loved Barack Obama, but hates Donald Trump. To be so popular when so much of the media is arrayed against him is possibly the President’s most impressive accomplishment of 2017.