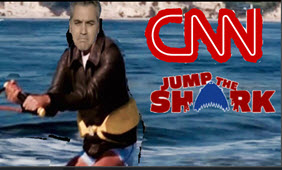 Every day it is becoming clearer that CNN, the once proud ratings giant and unquestioned cable network news leader, has become a total laughingstock. It has literally “jumped the shark,” meaning that a once proud broadcaster has become absurd. The original definition referred to the fifth season premiere episode of the hit show Happy Days, in which the main character, Fonzie literally jumps a shark while water skiing with his signature leather jacket. It is also a perfect reference to a broadcast network like CNN that has diminished greatly in quality and popularity.

Sadly, CNN has become infected with Trump Derangement Syndrome. The network is filled with liberal hosts who regularly spew hatred toward our President. In the aftermath of the infamous White House meeting on how to solve the problem of DACA recipients, U.S. Senator Dick Durbin (D-IL) claimed that the President used the word “s...hole” in reference to Haiti and countries in Africa. He supposedly asked why the United States should accept more people from those countries instead of countries such as Norway.

Despite the fact that the President and two Republican Senators disputed the fact that the word was used, CNN decided to air the word “s...hole” 196 times in just one day.  This shows their lack of broadcast standards and common decency as clearly parents should make sure their children do not watch the network. Even if the President did use the word, it was in a closed-door, “off the record” meeting. In contrast, CNN aired the word all over their network during all hours of the day.

On Tuesday, the President’s physician, Rear Admiral Ronny Jackson, publicly addressed the media for almost an hour. He delivered the results of the President’s annual physical and a 30 question cognitive test. Not surprisingly, the President passed both tests with flying colors, actually, scoring a 100% on the cognitive test. This superlative result upset the media who tried to question the integrity of the President’s physician, who also served both Presidents George W. Bush and Barack Obama. Even worse, CNN Chief Medical Correspondent, Dr. Sanjay Gupta, diagnosed the President with heart disease without personally examining him. This ludicrous conclusion was described as “hyperbolic” by U.S. Senator Marco Rubio (R-FL). It also shows how much CNN is invested in criticizing President Trump. The network cannot even accept a positive medical report.

This week, the President also announced his highly anticipated “Fake News Awards.” Among all news outlets, CNN was the overwhelming winner in the unsavory category of “Fake News” by winning four of the ten awards. No other news outlet came close as clearly CNN stands alone in this area.

Of course, this did not sit well with White House Correspondent Jim Acosta who claimed that the President, not his network, was the “King of Fake News.” Acosta had a tough week after being scolded by White House Press Secretary Sarah Huckabee Sanders and then being thrown out of a news briefing by President Trump. After several obnoxious questions from Acosta, who continued his well-documented pattern of childish antics, Trump yelled for Acosta to get “out.”

The previous week, presidential adviser Stephen Miller was shouted down by CNN anchor Jake Tapper. Miller was cut off mid-sentence and eventually escorted out of the CNN studio. Henceforth, the Trump administration should refrain from appearing on any CNN programs.

The White House should already know that CNN is the enemy and working constantly to present the President in the most negative light as possible. Instead of reporting on the improving stock market, high consumer confidence, historically low unemployment rates, CNN gave wall-to-wall coverage to the book of fiction, Fire and Fury, by controversial author Michael Wolff.

CNN will never give President Trump credit for the improving economy and for new jobs and bonuses being announced by corporate giants such as Wal-Mart. Instead, they will continue to push the Mueller investigation, tout every conspiracy theory they can to damage the credibility and effectiveness of the President. This is the complete opposite of how they used to operate when the network cared about the facts and real journalism. Today, the network is only concerned about one thing, attacking a man they despise, Donald Trump.