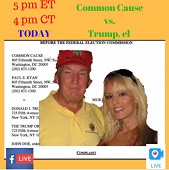 Or, might there be some legal issues implicated--impacting campaign laws that, if the facts alleged are true, could put Trump, his campaign, his business and perhaps others in jeopardy?

This is the overriding issue to be discussed today with Attorney Paul S. Ryan of Common Cause during a Facebook Live, on Bayoubuzz.com and Periscope-Twitter today, January 24 at 5PM ET, 4PM CT.

On Tuesday, Common Cause announced a pair of legal complaints against Trump and related organizations alleging the possible violation of federal law in relationship to the purported payment of $130,000 by Trump’s attorney, Michael Cohen. The claim being made in the media is that Cohen, through a shell organization, paid hush money to Daniels shortly before the elections. The President and Daniels deny the relationship although there exists evidence to the contrary. In the complaints, Common Cause claims that “because the funds were paid for the purpose of influencing the 2016 presidential general election,” the $130K settlement should've been considered a campaign expense.

Why did Common Cause take this legal action? What are the organization’s objectives? What are the facts being alleged? What might be the resulting consequences of this action, if any?

More in this category: « FRC's Tony Perkins join Trump, GOP in fundraising to combat FAKE NEWS Would a hush payment to Stormy Daniels by Trump's attorney be a federal violation? Pt. 1 »
back to top