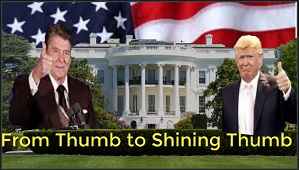 Today is the 107th birthday of the one of America’s greatest Presidents, Ronald Reagan. It was a long road to the presidency for Ronald Reagan as he was a voice for conservatism for decades before finally winning in 1980. Reagan was a successful actor and union leader before being elected Governor of California twice.

He used that experience to launch a presidential bid in 1976. In his first major attempt at the presidency, he lost a very close GOP nomination contest to President Gerald Ford. Instead of retreating from the political world, he remained a strong conservative voice throughout the country and ran for the presidency again in 1980. In this election, he successfully won the Republican presidential nomination and the presidency, overwhelmingly defeating incumbent Jimmy Carter by an electoral vote landslide of 489 to 49.

We should never forget the incredible challenge President Reagan faced when he took office. Our military had fallen into tremendous decline with equipment shortages, as well as low pay and morale for our service men and women. The Soviet Union was on the rampage worldwide, expanding their influence across the globe. A brutal Islamic regime in Iran seized our embassy, taking 53 Americans hostage and eventually keeping them for 444 days.

The Carter regime was seemingly incapable of dealing with the Soviets or the Iranians. Similarly, President Carter’s handling of the economy was abysmal. In the summer of 1980, the country was suffering from an all-time high misery index of 21.98%, a combination of high inflation and high unemployment. There were lines at the gas pumps, out of control interest rates, and oppressively high tax rates. The late 1970’s was a period of economic decline and “malaise,” as many Americans no longer had faith in their government, their military or the economy. The feckless Carter administration followed the Watergate scandal, which led to a presidential resignation and eroding public trust in our government.

Upon his election, Reagan immediately turned around the country with a blend of healthy optimism, sound economic policies and a commitment to a strong national defense. Immediately after his inauguration, the Iranians realized that it would be in their interest to release all of our hostages. Reagan passed two sets of historic tax cuts which helped create 20 million new jobs during his eight years in office. His policies tamed gasoline prices, dramatically lowered inflation, and helped reduce interest rates and unemployment. Instead of “misery” being prevalent throughout America, there was a return of patriotism. Thankfully, the “malaise” of the Carter years was gone.

Another vital component of his success was a commitment to our military. President Reagan raised pay for our military and massively boosted defense spending. He restored morale among the members of the armed services and bankrupted the Soviet Union in a military spending race they could not win. Eventually, the “evil empire” collapsed, freeing millions of people from the iron grip of tyranny. A major reason for the collapse of communism was the Reagan policy of “peace through strength.”

After several moderate, but unsuccessful, Bush presidencies, a scandal ridden Clinton administration and the liberal agenda of Barack Obama, once again, Americans were looking for massive change in 2016. Like Reagan, Donald Trump was an outsider, not a member of the establishment. Like Reagan, he was ridiculed and lampooned as an idiot, with no chance of winning. Like Reagan, Trump upset the political world with his election.

In his second term, Reagan faced the Iran-Contra scandal that led to hearings and a media frenzy. It was a Democratic Party attempt to remove a President that won 49 states in his re-election campaign, capturing an astounding 525 electoral votes. Likewise, President Trump is facing a Special Counsel investigating non-existent “Russian collusion.” This is also an attempt to thwart the will of the people in the 2016 election. Americans voted for change and President Trump is attempting to follow through on his commitment to the voters. Opposing him every step of the way are the same forces Ronald Reagan battled, the media, the “deep state” and the political establishment of both parties.

Fortunately, President Trump has followed the Reagan formula by leading Congress to pass a massive tax cut package that is already having a beneficial impact on the economy. Companies are hiring, giving bonuses and raises, while announcements have been made by corporate giants such as Apple and Exxon, to expand operations in the United States and make billions of dollars in new investments. In the last labor report, wages showed the largest increase since 2009, while 200,000 new jobs were created. The American economy is roaring back to life, and estimates are that in the first quarter of 2018, there will be over 5% growth.

Trump is not only following the Reagan economic model, he also believes in a strong defense and supports a significant increase in military spending and making sure our armed forces are the best equipped in the world.

In accomplishing his ambitious agenda, President Trump is facing intense opposition from the media, the bureaucracy and the political establishment, just like President Reagan. During his two terms in the White House, President Reagan went “over the heads” of the media by giving regular Oval Office speeches. This allowed Reagan to give his unadulterated views to the American people on the major events of his presidency without the filter of the liberal media.

In his efforts to deal with the liberal media, Donald Trump is once again following the Reagan model, but he communicates directly with the American people by his regular use of Twitter. This allows the President to bypass a press that is so biased against him that it provides him with negative coverage 95% of the time.

As we recognize the birthday of a great President, it is reassuring to know that our current President is following his example in many critical areas. If this continues. President Trump will make the same type of dramatic, positive impact on our country as President Reagan did in the 1980’s.

In many ways, we're watching Ronald Reagan figurative "thumbs up" of confidence being passed onto Donald Trump.  America is the beneficiary.

More in this category: « Did Nunes turn a Page on Mueller probe with House Intel memo? If Trump speaks to Mueller, can he restrain his "irresistible impulse"? »
back to top