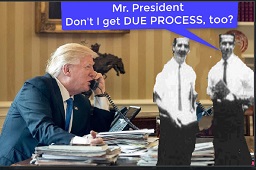 Presidents and various appointees have been called “dogs,” “bigamists,” “murderers,” “syphilitics,” and “thieves,” and left to grit their teeth because the First Amendment bars them from suing to encourage lively debate on matters of political interest and leadership. The law, wisely, recognizes a substantive difference between public figures and private citizens outside of the public square, despite the resulting disparate treatment.

Ted Cruz’s father, for example, can bring a suit against the president, and the Enquirer, after they alleged he was involved, somehow, in the assassination of JFK. Ted doesn’t share that right despite the, presumed, falsity of the charge. Similarly, Hillary Clinton can’t sue her detractors, (including Trump), on account of being called “crooked.” Nor can any other public figure sue who was called “little,” “corrupt,” “a liar,” “stupid,” or whatever name in the 2016 campaign.

Rob Porter, the recently resigned White House staff secretary, triggered Trump’s lamentation when allegations of past spousal abuse were levied against him by two former wives. One of the women documented her accusations with a photograph of a black eye, allegedly, inflicted on her by Porter. The staff secretary admitted he took the photo but claimed it was being taken out of context and denied both women’s accusations before leaving his job, anyway.

Due process is guaranteed under the Constitution and has been tested in civil rights, environmental protection, and voting privilege cases, about which most people have a fair understanding. It’s been, too, the subject of fierce debate when applied to criminal offenses, in particular, those carrying the harshest penalties. Most of the time it arises from allegations of governmental misconduct, or overreach, an example of which would be barring plaintiffs free access to the courts.

There has been no assertion that Porter, if prevented from suing his ex-wives for, purportedly, damaging his reputation, costing him his job, and/or diminishing any future earnings, cannot seek injunctive relief to quiet them If the claims against him are false, as he says. Such an action would adjudicate the truth. Porter’s justiciable abilities mean he has both substantive and procedural due process available to him.

It’s sad that Donald Trump, who has never hesitated to insult a perceived foe, is claiming that Porter is being treated unfairly. Instead, Trump might’ve forcefully condemned domestic violence. It was a chance to weigh in, personally, on an issue where his leadership could make a difference. Whoever is guiding him on this topic should be fired next.