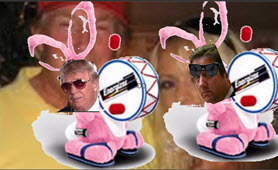 Last week, it was the Rob Porter firing which has ensnared the White House and has caused a House Committee today comprised of a Republican majority to open up an investigation on the matter.

During the Senate hearing, the Intelligence Directors (including the DNI, CIA, FBI, NSA) also admitted that the President has not directed them at all (which I interpret as not even discussing) the Russian meddling issue and how to deal with it effectively. Why would he since he continues to go on record as not really believing it was Putin and the Russians.

President Trump continues the narrative that he cares not for accusatory women by failing to personally publicly saying anything in support of the Porter wives. Trump has a knack and a tendency of calling or implying women accusers—to be liars--whether it is his 19 or so accusers or those of a Republican Judge running for US Senate or that of high-profile friends like O’Reilly and Roger Ailes.

It seems all anybody accused has to say to Trump, apparently is, “I did not do it, they are lying” and that’s enough for him. Next comes the Presidential approval—just ask Putin, Roy Moore, Rob Porter and the list goes on.  But, Trump claims he wants due process before allegations.  Fine, He sure did act like it when he hauled in the Clinton women debate night, or when he insinuated that Ted Cruz's dad helped Oswald kill President Kennedy.  Due process for the Clintons and Obama? No way. What Fox News and he say are attributed as being FACTS.

So, last night, Michael Cohen, the combative attorney for Donald Trump made an admission to the New York Times and then followed it with a statement in which shows just how far he will support Trump.

The New York Times reported that “Michael Cohen, lawyer for Trump, says he paid $130k to Stormy Daniels from his own pocket. Says he told FEC that in response to complaint from Common Cause”.

According to the report, “Neither the Trump Organization nor the Trump campaign was a party to the transaction with Ms. Clifford, and neither reimbursed me for the payment, either directly or indirectly."

Yet, going back into history, when the Stormy Daniels-Trump issue first broke that claimed that Cohen had paid the money to Daniels, the Trump's attorney wrote to the Wall Street Journal's reporters saying, “: “You’re [sic] obsessive drive to prove a false narrative, one that has been rebuked by all parties, must come to an end.”

Now that it appears Cohen has completely revealed himself as to be the liar and one that would do anything for Trump (maybe even go to jail for him?).  The issue being debated has turned to whether there was an actual violation of the law and if Trump was involved.

Weeks ago, I interviewed the Paul S. Ryan the Attorney for Common Cause over this very controversy. At the time, he said in relevant parts:

RYAN: The basis of our complaint we sent it to both the Federal Election Commission the Department of Justice is that there is very good reason to believe that team Trump, specifically the Trump Campaign Committee from the 2016 election violated several provisions of the federal election campaign act by with respect to a payment of $130,000 to the adult film actress Stormy Daniels, just before about 3 weeks before the 2016 election to keep her quiet, keep her from talking about her relationship 10 years prior with now president Donald Trump.
Now a reason that, will tell you a little bit more about the specific allegations of the violations of federal law. The starting point is the Federal Campaign Finance law--defines the term expenditure as any payment for the purpose of influencing a federal election. Here, I think we clearly had a payment to Stormy Daniels through an LLC that was set up by Donald Trump's personal lawyer Michael Cohen who's also at the time the top lawyer at the Trump organization--and the purpose of this payment was apparently to keep Stormy Daniels quiet at a time when she was talking to several major major national media Outlets, Good Morning America and Slate, possibly others and remember this came-- this was the payment was made, I believe in October 15th of 2016 which was about one week after there was a scandal that erupted in regarding a tape of President Trump talking about the things he could do to women because of his wealth.
So the Trump campaign was reeling at this time from a sexual assault, a sexual assault scandal or sexual misconduct related-scandal. So--payment to someone to influence the election that's an expenditure the Trump team was involved, Michael Cohen arranged it all so at a minimum the Trump campaign should have disclosed this to the FEC on its regular campaign financing disclosure reports as an expenditure. It didn't do so.

The second part of our allegations, the second big piece is dependent upon where the $130,000 came from. If the money came from Donald Trump's pocket, there is no other violations--we're just talking about a campaign Finance reporting violation. Actually the reporting violation is not only failure to report the expenditure out but a failure to report the inkind contribution into the committee. Get back to the source of the funds--it matters because of the money came from Donald Trump's pocket no further violations. However, if it came from the Trump organization, which again Michael Cohen who orchestrated all this was the head lawyer there at the time ,and that was an illegal corporate contribution to the Trump campaign. And if it came from an individual or another organization, then it was either potentially also an illegal corporate contribution or an illegal excessive individual contributions because the limit on contributions to candidates in 2016 was 2700 bucks.
So you have a handful of different potential violations here. The reporting violation seems pretty clear, the illegal contribution violation is depending on where the money came from

SABLUDOWSKY:Okay so here's a question I have and that is the connexity to the campaign. I mean you can argue that was just personal rather than campaign-related, am I correct?
RYAN: That the payment was personal?
SABLUDOWSKY:Yea, assuming there was a payment that it was personal but I mean because you don't know the source of the, of the of the money --is that correct?
RYAN:The source doesn't matter when determining the purpose of the payment and I think the facts of the situation, the timing of the payment--3 weeks before the general election, the fact that the recipient was in talks with major media outlets to go public with her story that clearly would have been damaging to the Trump campaign, the fact that it came a week after the Access Hollywood tape had created a firestorm and sexual misconduct scandal for the Trump organization--all of those facts come together in my view to establish that this was pretty clearly a payment to influence the campaign. That's what brings it within the scope of the campaign Finance laws, if and only if, this is important point--that the Trump team was involved and this means either Donald Trump knew about and involved, was involved in this or some other campaign official knew about and was involved in this
Now hypotheticaly that Donald Trump knew nothing about this was Michael Cohen acting on his own, then, our case becomes much much harder to prove. Then in order for us to successfully allege that there was a campaign Finance law violation we need to successfully argue that Michael Cullen was acting in the scope of his agency. He is an agent of Donald Trump that that much is clear whenever you're talking about someone who works for a company owned by Donald Trump, someone who's Donald Trump's personal lawyer, he's an agent. But, was this conduct within the scope of his agency and was he an agent of the Trump campaign doing this?
If there's no knowledge or involvement of Mr. Trump or his campaign staff that's a hard case to make. I believe that Donald Trump very likely knew all about this. I also suspect the money probably came from Donald Trump's pocket, but who knows? But I think Donald Trump knew and was involved that's what makes this a campaign finance violation, not a personal matter of any sort.

SABLUDOWSKY: If it came from his pocket, you are saying that it would not be a campaign violation

RYAN: it would not be a contribution limit violation because candidates are free under the US Supreme Cour’ts interpretation of the First Amendment to spend as much of their own money to support their candidacies as they want. The law still requires that when they do that, their campaigns report that's spending by the candidate as a contribution into the committee and an expenditure or disbursements out of the committee, but there's no limit on it. So if they came from Donald Trump's own pocket, we're talking, we're still talking about a disclosure violation, or reporting violation but we're not talking about any sort of contribution, illegal contribution violation.

No doubt, we will learn more about these controversies in the near future.  After all, the Trump team can't help themselves. Like attorney Michael Cohen, they just seem to give and give.

More in this category: « Trump hypocritically abuses due process in Porter's wives abuses controversies Key to Trump's infrastructure plan is overcoming roadblocks »
back to top