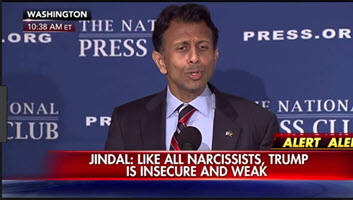 Former Louisiana Governor Bobby Jindal, who ran for President against then-candidate Donald Trump, is singing praise for Trump's policies. Jindal has been a significant critic of Trump's tweets and erractic behavior. During the campaign, the Louisiana governor called Trump a nariccist, labeling him insecure and weak.     However, in a op-ed which appeared in the Wall Street Journal, Jindal trumpet's the President's knack for understanding the blue-collar and middle-class households and his ability to fulfill his committments to them.
In essence, as the column is entitled, Jindal claims that Trump's success, in part, is because the President is keeping the promises made by his predecessors.  Trump has recently registered a 41.5 percent job approval according to the Real Clear Politics averages of polls.   Below is a segment of the Jindal op-ed.


In response to Donald Trump’s election, Democrats have suddenly rediscovered the blue-collar voters and middle-class households left behind by technological innovation and global trade. Like a penitent fasting during Lent, liberal statesmen have confessed that they didn’t spend enough taxpayer money on new redistributive programs. If only they had done more of what they had wanted to do in the first place.

What else could explain the sudden rise of supposedly nativist, protectionist and isolationist forces? Or Mr. Trump’s victory, which the self-proclaimed experts failed to predict? In this case America’s elites are uncharacteristically too humble: They do not give themselves enough credit for the politics they helped create.

Mr. Trump’s populism is the direct result of the establishment’s hypocrisy. He is implementing policies that more-mainstream figures from both political parties have promised for years but then failed to accomplish. In this way, they built the demand for the actions they now denounce as destructive and even racist. Moving the U.S. Embassy in Israel to Jerusalem, pushing back against China’s unfair trade practices, securing the border—aren’t those are just empty campaign promises? No candidate thinks he can actually get them done, right? Somebody forgot to tell Mr. Trump.

Start with foreign policy. A bipartisan chorus of Washington mandarins complains that the U.S. is retreating from international leadership, creating a void increasingly filled by a rising China. Yet Mr. Trump is simply doing what his predecessors pledged to do. Before 9/11 intervened, George W. Bush promised a “humble” foreign policy and fewer overseas deployments. In 2008, Barack Obama criticized Mr. Bush for being more focused on rebuilding Iraq than America, and he promised to do the reverse. Mr. Obama opposed the Iraq surge, but as president announced his own surge in Afghanistan. Then when President Obama began to draw down troops there, he said America needed to focus on “nation-building here at home.”

More in this category: « Trump's not Mueller's target, but will President talk? Michelle Obama's off about with "Parent President", Trump voters saved America »
back to top