While sky falls on GOP and Trump, history continues 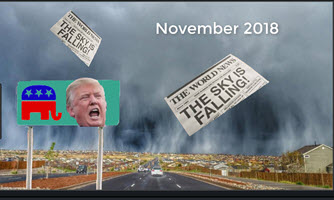 The sky won’t fall if Democrats get elected in droves in November, or Republican resist a wave. The world won’t end if Donald Trump is sent packing, either, but you wouldn’t know it from the president’s fund-raising pleas and Republican hand-wringing. Demographics are more likely than anything else to change the country. It doesn’t matter that James Comey is skewering the president, or whomsoever may sit in seats currently occupied by Paul Ryan or Mitch McConnell. It’s pretty clear that young people, already, hate Trump and his bellicose politics by a large margin.

It’s not like Trump and his supporters haven’t brought this upon themselves. The politics of division, disregard for the environment, and claims of divine direction are unpersuasive to young, upcoming, voters. What’s being fought about at the moment is not the unforeseen future; it’s the iniquitous place in history that will be occupied by the baby boomers who enabled Donald Trump. It’s their collective shame that Trump epitomizes.

Every generation, irrespective of era or place, resists its own passing. Few have exited without the sure belief that the end of times is near, born out of the conceit that the world cannot continue without them. This, despite evidence that they’ll turn, soon, like all others, into scant words on pages of books, or screens, that few will ever read, much less care about.

James Comey will be forgotten, too, though his assertions that Donald Trump was a distinctly unsuited man for chief executive may linger longer than most characterizations. An example can be seen in Ulysses S. Grant who, basically, won the civil war. His exploits on the battle field have been subsumed by the corruption of his administration. Trump’s mild adventurism in the Middle East will be overlooked in the future, but his nepotism and self-enrichment won’t.

Steve Bannon, however briefly relevant, will disappear despite his mighty his efforts to shape the country. One day, ironically, Stephanie Clifford will eclipse him in the collective memory, if for no other reason than she’s more photogenic. Obscure academics may write about the allegations in the Christopher Steele dossier, but the chances are that, if at all, its author’s name will appear less often than “Valley Girl” Meghan Markle, a soon to be royal bride.

The name-calling engaged in by Trump will be as forgettable as the f-bombs thrown by Richard Nixon at his enemies. Even among those alive at the time it’s unlikely that more than a few can name more than a single member of John F. Kennedy’s cabinet and, before long, it’ll be none who recall. Obsolescent memory isn’t limited to politics. It’s everywhere. Pope Benedict the XV, (or is it the XVI), will be recalled because he quit, not for anything else he did. The list goes on forever.

Here’s the point: Donald Trump should be tossed, run out of town on a rail, and denied a place on the two-dollar bill.  But, if he is impeached, his brief place in history will be expanded from a couple of lines to, perhaps, a paragraph for at least a couple of generations. After that, his fall will be as relevant as Bill Clinton’s, or Richard Nixon’s, already fading legacies. Journalists will continue to cover this unseemly time because it is ours even if what remains, at the end, will be tone more than substance. Pet the cat or dog, enjoy the show, and vote for the memories.

More in this category: « Crouere: Quit now Ryan, GOP, back Trump, time to beat Blue Wave James Comey battling President Trump in the ring of TRUTH »
back to top