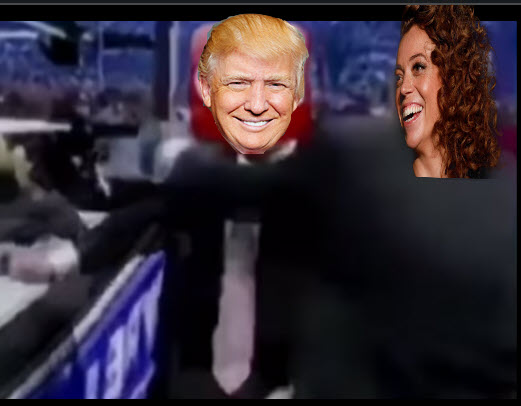 Isn’t it amazing that the Trump Alternative Facts crew is so up in arms over Michelle Wolf’s comedic shtick.

It’s not like she called Donald Trump, a “Fake President” or “The enemy of the American people” or “Lyin Donald”.

No.  Those wouldn't have gotten any laughs.

Instead, she, as comedians often do, went slightly over the top and cross the line.  Specifically, she referred to his spokesperson’s body part. Thankfully, some media folks felt it was as bit off color and publicly stated their respective cases. That’s what fair people do when they believe somebody is wronged, even the slightest and even if it somebody who doesn't deserve the sympathy.

Actually, perhaps if the President had been man enough to stand up there like all of the presidents did before him and mix it up instead of playing “the victim”, we wouldn’t be having this conversation about Sarah Huckabee Sander’s “smokey eyes”, whatever stupidity Wolf meant by all of that, in the first place. No, he would have been there taking it and dishing it out. That’s what President’s do, at least those who have thick enough skins that they don’t send out substitutes to get hit across the eyes.

Perhaps if the Comedy Central star would have called him a “son of a B” as the president publicly mouthed recently, or showed a video of a CNN wrestler beating up a man with Trump-head affixed, perhaps his loyalists devotees would not mind one bit.

Actually, what’s really hilarious is the sense of outrage we are hearing from those who are incensed over the words of a comedian who is paid to be outlandish. Yet, if any one of us complain about any of the tens of hundreds of totally inappropriate Trump acts or statements, we are met with a counterattack that we being "snowflakes". When the President hurls one of his ALL UPPER CASE insults of the hour, or his making inappropriate comments at a Boy Scout Rally or his calling a whole nation A-holes, one better not complain. If you do, you will surely get slapped with any one of these past defenses by his idolizers:

6. We hired him to shake things up

9. The joke speaks for himself

10. We knew we were getting someone irreverent when we hired him

Should any of us care about whether Michelle Wolfe went after one side of the political spectrum and not the other? Sure we should. She should be an equal opportnity offender. Being a paid humorist assailant and shooting only one side is bad strategy, if not fair play.

But if you lodge fair criticism of the President or his team, the response will be any one of the above or even worse--"you're just a hater" or "you're a liberal" or "you just want the man to fail". So when the Trumpers can gets out of joint with a tasteless bad joke that should not have been said, I must admit, it's hard to really care. There are simply many more offensive comments coming out of the White House than any White House Correspondent Dinner ashes, lies or eyes.

More in this category: « Last rites for the Republican-controlled Congress in era of Trump? Michelle Wolf with anti-Trump rant personifies slanted media, industry fall »
back to top