Another "Trumped-Up" excuse for not denouncing Roseanne Barr's tweets 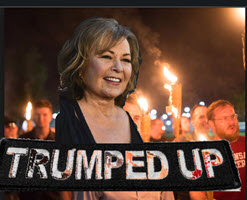 This whole Trump-Roseanne Barr thing is a joke, even if the comedian isn't doing the laughing.

We now know that Ms. Barr, the former star from the ABC television program that has just been canned has proven that she can be as disgusting as Kathy Griffin when it comes time to punch lines to the gut. Griffin lost her job and popularity by displaying a body-less, bloody head of Trump. Now, Barr has followed suit with her racist and conspiratorial attempts at humor.

We knew on Tuesday afternoon that Donald Trump was too busy to comment on the latest controversy, this one uttered by one of his followers. Yesterday, he displayed he was not that busy. He tweeted that ABC did not apologize to him, making the incident about him, not Barr and those she has injured.

Time after time, we have expected Donald Trump to either apologize or make statements denouncing comments dealing with race, ethnicity and social differences, but he has refused. Why are we seeing repeat after repeat of a callous man who is more concerned about his base than the justifiable feelings of those who feel insulted? How can Trump possibly enter this discussion by slamming ABC for its dealing iwth him and not mention the real issue here, a racist woman doing a racist thing?  Indeed, there are some double standards as he, his administration and the right wing point out. Actually, the double standards exist on both sides of the political equator. But there is no standards at all when a man is so uncooth that he cannot put himself aside for just a single moment and say to the world, we cannot do this. TThis racism is not acceptable.

Now, those particular followers who are haters of whites and Jews and Muslims and Hispanics and people from SH*t countries have even more cover for their slimy race and religion bating. Very sad. Very shameful.

After all, at least according to McEnany, she said that he has already “categorically denounced” racism."

So, here's my questions" Since he has denounced "fake news" a billion times, does he really need to denounce it every time he doesn't like what is being said about him? Why is he wasting his time and our money? Just put it in the "categorically" category.

Surely, he has denounced terrorism before, and everybody is against terrorism. So, surely he needs not denounce it every time another attack occurs, right? Filed under "categorically" denounced.

Is there a pattern developing? Anything that might peeve off his base, instead of addressing it right on, all he has got to say is, we talked all about that a year or two ago. Different facts? Who cares. "We categorically denounce", nothing more said.

Yet he has time to talk or tweet about how ABC should apologize to him for things that have been said to or about him, but, he doesn't have time to say a few words showing his own disgust about what is offensive to tens of millions?

And some people wonder why Trump is viewed as being insensitive to the feelings of black and brown people? Categorically speaking, that is!

More in this category: « Trump's TruthGate hurts American Justice, National Security for his own self-protection Trump's Economy helping voters wave bye to Pelosi, Dem control of Congress »
back to top