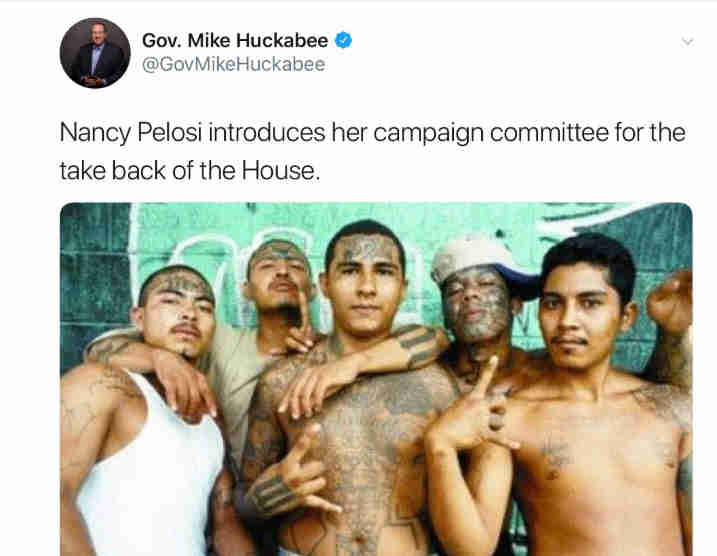 The Red Hen got egged today, except it was the wrong bird.  The Washington DC Red Hen which has nothing to do with the one in Virginia whose owner disgustingly gave Trump’s press secretary Sarah Huckabee Sanders, the boot, has received threats and eggs thrown at it.

Maxine Waters, the obnoxious and irresponsible Congresswoman stirred up another hornet’s nest yesterday when she incited that people should harass White House employees.  Senator Corey Booker appears to be supporting her and Nancy Pelosi seems to be giving her a pass.

Also this weekend, Sarah Huckabee Sanders’ daddy, the man who wears his religion on his collar tweeted the image above. In doing so, at no time did he refer to the boys/man in the picture as M13 gang. However, after getting caught with his tweet in the cookie jar, he defended his post referring to them as criminals.  Not at all surprising, the religious right agent to the heavens, Franklin Graham defended the former Arkansas Governor.  Interestingly, the Huckabee twitter post appears to be removed from his feed. Why?

Today, President Donald Trump, in response to Waters’s comments called her low IQ. This is not the first time the president has claimed that the Congresswoman did not possess the gray matter requisite. In fact, he and his  administration have a penchant for questioning the intelligence of women, especially black women.  Remember Chief of Staff John Kelly's empty vessel remark?

Over the past few days, Trump who has messed up royally in his battle at the border has decided that due process for sex offenders is more important than for people who look for political asylum. On Friday, the president tried to turn the table on the major blunder of his immigration policy.  To take the focus away from the crying babies, he promoted the unfortunate deaths of a few Americans who sadly were killed by illegal immigrants. He claimed they were harmed more than those who have been separated at the border. Trump argued that these parents were permanently separated from their loved ones whereas the incoming immigrants separations were temporary.  Instead of owning up to his policy reversals and chaos which has caused his polls to plummet this week, he doubled down and made the parents and families of those killed by illegal immigrants, the real victims.

Which makes me wonder whether we can make it to the next election, the one coming up in November, without a total meltdown in civility. There is no doubt that in my view, the owner of the Virginia Red Hen restaurant should leave politics out of the omelettes. No doubt that Maxine Waters raw and dirty rhetoric helps Trump rally his cause.  She absolutely should apologize immediately.  Those defending her comment or not speaking out have themselves to blame for any type of backlash helping this president.

The truth is--Donald Trump and Waters will always be obnoxious.  In my books, the Huckabees are a great disappointment. But, of all of the issues coming out of the fiery discourse this weekend that causes the greatest harm to this country--is the destruction of Due Process under the Law.

Whether Trump wants it or not, or knows it or not, Due Process even applies to those people at the border trying to get into this country. Mothers who flee from the horrors of political prosecution have a right to have their cases heard.

The very idea that Trump would urge that the public give one of his former employees due process after being fired from his job for allegedly battering his former wives, yet, consider it to be disposable now against the people he does not like, is case positive that this country has a serious problem.  These kinds of Trump statements beget irrational responses, thus a totally vicious and dangerous cycle.

It absolutely did not help that the dad of his press secretary posted an obviously racist picture without proper identification of their crimes or who they are. It is obvious that hate has no borders, that fear of others helps win elections. Irresponsible behaviors, whether it comes from Trump or Waters, Huckabee, Pelosi or the Red Hen owner resonate through the blogosphere much faster than love.

Where will all of this anger end up? Don’t know.

And brother, I’m scared to find out.

CLASSIC!
PELOSI blames @realDonaldTrump for Maxine (Papa's Got a Brand New Bag) Waters call to harass and intimidate Trump supporters.
Says NOTHING about WATERS GHETTO BEHAVIOR when asked to condemn it. https://t.co/CvaWjE968h

As much as I agree with @SteveScalise, the horses have left the barn already. https://t.co/n5EFC7iei6

More hate from the left...this time from a “journalist” in the White House press corps.@CNN commentator April Ryan goes after our Co-founder @AmyKremer...#WomenforTrump #MAGA #KAG pic.twitter.com/TxHblZlYLz

VIDEO: @CoryBooker Agrees With @RepMaxineWaters On Harassing @POTUS Staffers: “Nothing Wrong With Confronting” Them https://t.co/XCWKS85QIX pic.twitter.com/HGHMbDbW3v

Trump wrongly claims Maxine Waters called for harm to his supporters, warns "Be careful what you wish for" https://t.co/2e0f1gxeZJ pic.twitter.com/TC972JhZ6H

Above are some recent tweets on these issues

More in this category: « More "Trump Lie Syndrome" as he abruptly reverses 'zero tolerance" policy The fruits of the poisonous Trump rhetoric can turn sour »
back to top