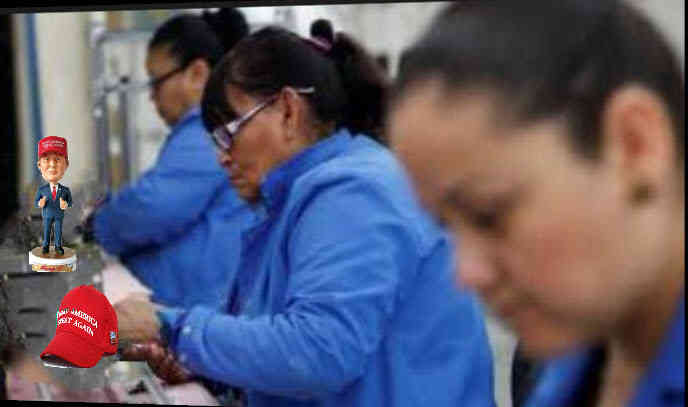 Make America Great Again has been the rallying cry since the onset of Donald Trump’s bid for the presidency. In fact, according to many experts, during the course of his brief presidency, the economy pretty much has been great. Part of the reason so far has been Trump’s relaxation of regulations which businesses have found suffocating.  Also, many experts and business people point to the recent tax break. But, what exactly does “Make America Great Again” mean in the area of its economy?

In today’s segment (which transcript and entire show video is below), the focus turned upon two of the more perplexing issues facing the nation and the world. The first, is likely not to change, the dramatic increase and dependency upon automation in the workplace. The second, is an area in which the President is absolutely trying to change—immigration, as he attempts to effectuate his goals in returning the country to some prior concept of greatness.

We begin today’s segment where we left off in part two, automation and the impact upon the economy.

SABLUDOWSKY: For example in New Orleans in Port of Louisiana, etc., I mean you have these ports that are basically automated. I mean I remember the longshoremen--what happened to them yea

RICCHUTI: Yeah oh isn't that the truth. My grandfather was a longshoreman up in uh up in Boston and that job wouldn't really exist and that's the way the ports compete against each other and I just it's it's not gonna change it's only gonna move in one direction so the people that are kind of hoping for that guy carrying the lunch box to go to the steel mill is--it's just a fantasy, and and I would argue we're doing better now.

It's funny, Steve I go around the country and give speeches and some people, I'm gonna say  mainly older people  tell ya--"it's not like it was it was great before  and well the truth of the matter is-- uh  we're doing better almost everybody is doing better than they were  thirty years ago, so I don't know if it's nostalgia or what it is-- that was a big thing in the presidential election--oh push things back the way they were-- and and you can't put the genie back in the bottle. We are a world economy and that's what it's gonna be. I, the other thing, I think people don't get, that are against it--is that it's not a zero-sum game. If just just because these these other nations are doing well, doesn't mean that they're taking it away from us. And I think that's that's one of it one of the big things we have to explain to people.

SABLUDOWSKY: Okay so let me let me just through this out--I mean obviously there are people and particularly the president who says that  that there is no level playing field, that  they're being unfair, Canada is being unfair with tariffs, England, Germany, the auto industry, China, obviously. And so the only way, the only way to be able to balance the the field, to level it, is through tariffs--our own tariffs

RICCHUTI: And one of the problems there is  the president said these are trade wars are easy to win-- they've never been easy to win--I don't know where that comes from. He's and  you've got a lot of anti-american feelings around the country since the election--around the world and I don't see them giving in.  I think they they really want to hold their own here. And one thing that does, I don't know about the level playing field and all of that, i've never really spent a lot of time with that, but the one thing is this the pirating technology by the Chinese, that is that is a huge deal. And but the interesting thing with this immigration is that  there's a lot of anti-immigrant feelings, but you look around, and at the low end,  we need these need these folks, I mean if you look at the people that are  picking fruit and vegetables, I mean Americans aren't going to do that job. I,  I keep thinking if they really do throw everybody out, you're gonna pay $45 for salad and and the flipside of that is the students I have here Tulane which are foreign students, of course, usually the best students in the class, and and they are getting nixed in terms of getting jobs in places where we really need smart people like Silicon Valley, Medical Research, financial services, so there is no middle, it just seems like it's a very high end a very low end-- and so I just don't see it being a problem. And plus, we've been a nation of immigrants from from day one.  When the Italians came, that was my family ,yeah they were they weren't crazy about us.

SABLUDOWSKY: I certainly understand it. You said that the some foreign students would being nixed over?

RICCHUTI: It's getting harder and harder to get that h-1b visa and and that's what they've always come in on and usually work a few years, show how well they can do, and then get  some sort of provable to get to get citizenship, but the the doors are blocking on a lot of these things and and and you talk to people like out in Silicon Valley or the financial service and they're they're furious. They just can't get enough American people to do these jobs and or could do these jobs and then the flipside I mentioned like picking fruit and vegetables there your , I was I was given a speech the other day out in San Diego, and I said if you really wanna nix, nix immigration, we can all take a break at 11 o'clock to clean our own hotel rooms.  It's it's it's just very --it, I just, a lot of things that are going on just go against standard economic understanding. So maybe,  maybe he's right. Maybe he's not.

SABLUDOWSKY: So in in terms of in terms of employment or there enough jobs out there for the people who need the jobs right now? I mean, I understand where it's almost zero unemployment.

I think  if you look at the people that are unemployed now it is either a skills mismatch which is  obviously or a geographic mismatch and so you've got people,  I think probably you and I you and I most people listening have changed cities to to move the career up and so there's people that just aren't gonna--  they're not gonna move the Amazon headquarters to Hazard Kentucky, it's just not gonna, just not gonna happen. I'm not knocking on Hazard Kentucky, it's an example. But so I think it's a suite, the best thing the United States could do with money right now, is to retool the worker and because that's that's really what what counts in here. And  this is feeling, Steve, that you get where people say "well,  that's that's not really true the sub-4% unemployment, because we have all these the percentage of people working is in very high but that's really kind of a crazy number. Usually the party out of power uses uses that word use. But it's up,  it includes students, and I think we should all hope  they keep getting and training people at home, managing families, the  people that are have a physical and infirmity, this is it, they are not coming back in the workforce. In fact that number,  about 82% is  in the workforce, that numbers actually gonna just get lower and lower, as the baby boomers retire.  I had a slide about that in a presentation I decided the topic title would be "get up grandpa"  and-- something-- it's just not gonna happen. So any, if you, Steve, if you had a one-term, you'd give an economist about, what is a key metric to looking at an economy it's gonna get stronger-- it's the population of working-age people. That is  I know we've got a hundred different metrics, but that's, that's really that's really it. In fact and you look at countries, we're going up, which is positive, not very quickly and it's almost all because of immigration but you look at countries like Italy Japan where their population keeps aging, people aren't moving there, I mean that's the death knell to an economy. You need these folks in here.