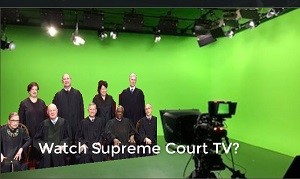 Washington Post columnist Kathleen Parker wrote recently that cameras should be taken out of the courtroom, particularly in high-profile trials.  She concludes:  “Our mighty respect for the public’s right to know — has clouded our judgment.  There may be no way to quantitatively prove that cameras influence courtroom behavior and, possibly, a trial’s outcome. But anyone who’s ever sat in front of a camera knows that it is so.”

I disagree with Ms. Parker.  The criminal justice system could use some help.  A majority of Americans feel that justice often doesn’t prevail.  A nationwide poll by the respected Rasmussen Reports found that 45% of Americans feel that the justice system is fair.  Only 34% felt that the system is unbiased to the poor.  That’s a lot of cynicism.  Maybe more public trials would help skeptics gain more confidence in a system where many feel over half the time that justice is not served.

America has a strong tradition of public trials. In early colonial America, courthouses were the centers of community life, and most citizens regularly attended criminal trials. In fact, trials frequently became community events. Citizens were knowledgeable about trials, and there was wide participation in the process — especially in rural America, where prosecutions were often scheduled on market day, when local farmers came to town for supplies.  Many courtrooms were built to accommodate 300 or more observers.

Back then, citizens closely observed the defendants, knew when judges issued ridiculous rulings, and saw firsthand whenever justice was perverted. Whatever happened, the citizens were there, watching.  The court system belonged to them. The televising of criminal trials would merely be an extension of this direct review by the average citizen.

Would televising criminal trials create a circus atmosphere?  There’s no reason to think that they would. In fact, many of our most sacred ceremonies, including church services and inaugurations, are televised without dignity being lost.  Judge Burton Katz said it well:  “We should bring pressure to bear on all judges to open up their courtrooms to public scrutiny.  Members of the judiciary enjoy great entitlements and wield enormous power. They bear close watching by an informed public. I guarantee that the public would be amazed at what goes on in some court rooms.”

Back in 1997 when I was a practicing attorney in Louisiana, I participated in the state’s first televised trial before the Louisiana Supreme Court.  A state senator was opposing my authority to impound the automobiles of uninsured drivers.  I was the elected state Insurance Commissioner at the time, and represented the state in our effort to uphold the impoundment law. The issue was important to the vast majority of Louisianans, and they were entitled to hear the arguments, and watch the trial in progress.  No one pandered to the cameras, and the entire courtroom procedure was straightforward and dignified.  The proceedings were televised without a hitch.

Harvard law professor and criminal defense attorney Alan Dershowitz put it this way: “Live television coverage may magnify the faults in the legal system, and show it warts and all. But in a democracy the public has the right to see its institutions in operation, close-up.  Moreover, live television coverage generally brings out the best, not the worst in judges, lawyers and other participants.  The video camera helps to keep the system honest by keeping it open.”

America prides itself in being an open society that protects and encourages the public’s right to know.  Too often, courtrooms have become bastions of secrecy where the public has little understanding of how the system works and how verdicts are reached.

The video camera serves as a check and balance.  We can better keep the system honest by keeping it open and easily available to the public.  Time to turn on the cameras.

More in this category: « Crouere: Jeanine Pirro, victim of abusive The View whoopi and hollering Grant Stern: Putin-Butina-NRA-Republican Party connection »
back to top