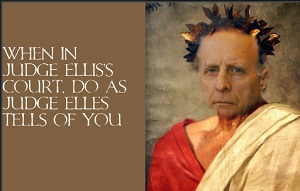 Trump may have lauded him too soon, even though the judge, to date, has been a bane to prosecutors who planned on illustrating Manafort’s alleged greed with a show befitting the Wealth Channel or the Lifestyles of the Rich and Famous. There’s deft logic to walking a jury through a financial defendant’s closets, spying antiques and treasures,  touring  grand properties, and counting jars of Petrossian caviar. It’s more compelling than comparing signatures on invoices or thumbing through fishy P&Ls.

Ellis wanted the jury to look at invoices, contracts, and check registers, in lieu of dyed ostrich skin windbreakers and tacky sports coats that, each, costs as much as a Harley Davidson. He was right to assert that wealth isn’t a crime, implying that success doesn’t imply a lack of morals, and that the jury didn’t need to know the difference between Bijan and a Men’s Warehouse suit, which is akin to comparing Cristal champagne to Coors. Manafort, after all, was in the image-making business and it’s important in that line of work for people to like how you look, but it  only works if you can afford the finery.

The judge may’ve erred in the way he’s been treating prosecutors, however, because of the message it sends the jury. Ellis has attacked their motives, form of questions, demeanor, strategy, proof and, broadly, has engaged in what seems, to many observers, to be overly harsh treatment. Judges, of course, are human, too, and Ellis apologized for one particularly intemperate outburst, leading prosecutors to ask for more self-correction. Sometimes, however inadvertently, a thumb can slip onto the scale and that’s a problem Ellis may now face as the focus shifts to the defense.

After hearing from prosecutors at sidebar about why their star witness and Manafort ex-partner, Rick Gates, shouldn’t be compelled to answer questions about what team Mueller asked him concerning his work on the Trump campaign, and in its aftermath, the tone and tenor of the trial inexplicably changed. Manafort, suddenly, faded into the background and an absent Trump took center stage for intriguing, still secret reasons, presently under seal on account of sensitive, continuing investigations.

Appellate courts have long recognized that trial courts, in applicable circumstances affecting defendants, can promote fairness by precautionary instructions designed to diminish negative perceptions, if any, that might influence a jury. If Ellis goes this route, though not required in this case, it could be bad news for Manafort and his former boss. The fortunes of the two men are as inextricably intertwined as it’s sure that all roads lead to Rome.
Read 2470 times Last modified on Monday, 13 August 2018 19:07
Tweet
Tweet
Published in Donald Trump news
Tagged under

More in this category: « Charlottesville anniversary I; The Democrats are the racists, right? Despite Omarosa, media hysteria, blacks benefiting, feel good about Trump »
back to top