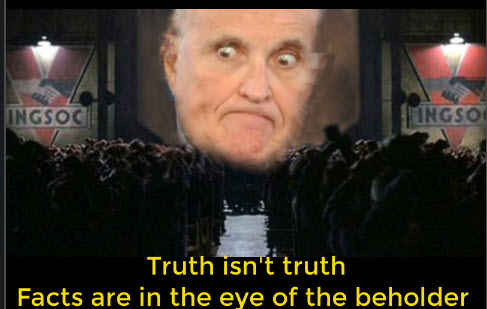 “The truth isn’t the truth,” according to Donald Trump’s lawyer, Rudy Giuliani, on Sunday. This echoes Trump’s recent statement to veterans, "Just remember, what you are seeing and what you are reading is not what's happening” and blamed “fake news” for the confusion. Author Ambrose Bierce had this to say on the topic, “The truth (with the comfort it brings) is open to all who grope in the night, crying for wisdom’s holy light.” Unfortunately, the light Giuliani and his boss have shed on Russian interference in U.S. elections has been diffuse to date, despite U.S. intelligence’s high beams.

A personal attack, this one removed from the realm of philosophy, was issued by Trump against former White House counsel, John Dean, who the president called a “rat.” By bringing to light the crimes of crooked Richard Nixon, including the existence of slush funds, payments of hush money, and covering up a burglary committed to steal opposition research from Democrats, Dean violated what for Trump is a sacrosanct code of silence. The implications are not comforting.

The Dean comment, however, was lost in a maze of unflattering revelations by Trump’s close aide, Omarosa, who he made so famous she needs no last name. The president rebutted her claims that he’s “unhinged” by calling Omarosa a “dog.” The release of surreptitious tapes she made, however, seems to support some of the allegations prompted by chief of staff John Kelly’s veiled threats made during her firing. A fake cover story was created that the secret service had to remove Omarosa from the WH, following her dismissal, when she tried to break into the residence to confront Trump about the firing. In a rebuke to its authors, the secret service denied this ever happened.

In other news, the president repeated his allegations that Mueller’s investigation is a “rigged witch hunt.” Though tiring, they’re telling since they imply that the Russia investigation will find wrongdoing, which makes these incessant protests look like a cognizance of guilt. Giuliani threatened Mueller by saying if the investigation isn’t complete in two weeks, “we’ll come after him like a ton of bricks.” This is unlikely to frighten Mueller who won a bronze star in Vietnam for valor, and the fact is, the more Rudy talks, the worse it gets for Trump.

The overarching issue for the president in these troubles is one of tactics. Clearly, no one in the Trump White House seems to have the slightest idea of how to deal with the Russia crisis. There are highly sophisticated companies, specialized firms, and individuals who are skilled at these things. One, or more, of them ought to be engaged ASAP, because the current state of affairs is dire, and that’s the plain and simple truth.