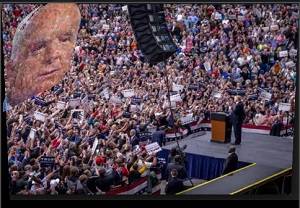 More eloquent words than any found here best describe John McCain’s life, character, faith, and love of country. McCain’s America looked forward with optimism to being a better place, and if something was wrong no one man, alone, was capable of fixing it. That was the people’s job, all of us together, respectful of one another, even in the midst of raucous debate, searching to find what unites, rather than what divides. McCain lived a life of hope, eschewing despair even in the most despairing of circumstances. For that he was a great American.

The pettiness of the administration in its response to the late senator’s death, exemplified by the White House’s upsy-daisy flag tribute, was marked by a fundamental meanness. Its architects reveal much about themselves and where we are at present. This White House sees enemies everywhere: in courts, immigrants, the press, Democrats and, in short, whomsoever it perceives as a foe.

To McCain honor had meaning. It wasn’t a hollow word. Like all men, the senator had faults, and would be the first person to consider himself to have been anything but a work in progress, now concluded. The self-deprecating humor he was so famous for during his life was based on this recognition, but it wasn’t limited to it. McCain never shied away from admitting mistakes or personal failings. He did so with grace and moved on. He was never a bitter small man. This makes comparisons between McCain and the current president inevitable.

Donald Trump isn’t John McCain and it has nothing to do with Trump’s legally obtained deferments during Vietnam, an internally disruptive foreign war that its architects admitted knowing, at the time, was unwinnable. Even the most ardent anti-war activists had respect for the courage of the residents of the Hanoi Hilton, including McCain. He earned that respect because of who he was as a person. Few respect Trump for who he is as a person and there, in a nutshell, is the difference between them.

Presently, we’re engaged in an internal war, this one for the soul of America. The president’s suggestion to Evangelical leaders, this week, that if his party is defeated in the midterms there’ll be violence is more than a threat, it’s an intimation that the prophecy should be self-fulfilling. The idea, which Trump has voiced, that an impeachment will bankrupt the country reflects an abhorrent notion that money matters more to his countrymen than justice, the foundation of the Declaration of Independence.

“Before entering upon so grave a matter as the destruction of our national fabric, with all its benefits, its memories, and its hopes, would it not be wise to ascertain precisely why we do it? Will you hazard so desperate a step while there is any possibility that any portion of the ills you fly from have no real existence? Will you, while the certain ills you fly to are greater than all the real ones you fly from, will you risk the commission of so fearful a mistake?”