Trump is not anti-Semitic, but his and others' words really matter 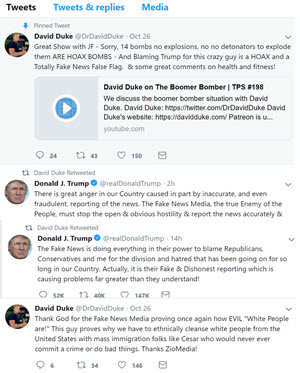 Ever more so than before, words of our leaders, our media, political opponents and our own words matter.

So, when I witness the country seeming to come apart, I look to words of those who want radical change.

One of those individuals is people such as David Duke.

Wait, don’t say it. I think I know what you’re thinking.

You might be ready to say that “nobody cares about Duke. He’s a has been, irrelevant. It’s only the liberals who care about Duke, who want to stir the pot against the right and Trump”.

Perhaps somewhat true. He might not be seen on network TV, but a person with 100,000 followers or so on twitter andequalsy more on other social, is never irrelevant.

Today, America is on the brink, with a President whose political and legal existence might be highly vulnerable should the Democrats take the House.

We live in a world where President Trump reads from the TelePrompTer that we should come together as a country and then writes on twitter and says in his speeches words that mean the total opposite.

Which leaves us in a deep quandary. Which President should we believe? Would it be the President, speaking in a soft comforting voice such as that from last week when he told us that some of our public officials (no names spoken) and news media (no name given) are being threatened or intimidated?

Would it be the President who publicly states in his speech that there is no room for anti-Semitism?

Or should it be the President, who hours after those comforting father-like words urging us lower the rhetoric, then sends out tweets such as those above, once again, calling the media the enemy of the people?

Which President should we believe? The man who assures us that anti-Semitism must never exist or the man who frequently uses words such as “the enemy of the people”—the very words that brutal dictators and haters such as Stalin and Hitler used when they successfully destroyed any and all opposition and speech.

Many of his ardent backers, however, claim Trump is not anti-Semitic. I totally agree. His grandchildren are Jewish, his daughter has converted to Judaism, he has been the one president that Israel could rely upon, not those former Presidents who blamed Israel for everything and often left the Jewish state wondering if they are friend or foe.

He has prominent Jewish leaders throughout his administration and highest positions. It is almost impossible for anybody to call him a Jew Hater and expect respect or not expect legitimate opposition.

So, this weekend, after the killing of innocent men and women praying to God, the debate thickens. What responsibility, if any, should he and others share for the horrors of this past week?

As President Obama was blamed for eight years before for incidents that happened on his watch, the focus turns to his successor. How can anyone blame him for the tragic and senseless killings this past Saturday in Pittsburgh or the terror threats, bombs (whether intended to explode or not)?

We can’t. Neither he nor Obama pulled the triggers when the blood flowed. Nor did Trump conspire to bomb-threat his political enemies.

But what in this case, Trump has done and refuses to stop doing is very dangerous. The President, and others, refuse to lower the rhetoric.

More than that, he refuses to understand the power of his words and their influences among those who also have the power and influence to say and write things that ultimately do cause harm and action.

Worse, he refuses to take any responsibility for the foreseeable consequences of his own words and actions that end up breathing life in the souls of the angry and forgotten.

Trump is not innocent and bears significant responsibility for the acidity and hostile environment shaping our hurtful events of today. Just like he deserves credit for giving businesses hope, he must take the burden that his angry words do not vaporize in ether.

Trump knows or must know that his very words are being tweeted and promoted by those people we have clearly identified as haters and anti-Semites.  He knows he must rally the masses, generate the heat to get his loyal base to the polls.

It is not surprising that demonizing and trying to nullify the influence of the media, donning the title of nationalist despite the very frightful connotation and history, calling people of a different color, race, religion or ethnicity for political purposes of an election, is nothing less than scapegoating, just as we read about that occurred in Germany 1930’s, over eight decades ago.

Our President must know that in the age of digital technology, his angry words will be retweeted by the real haters who will adopt them as their own and who will use them to justify their own passions and existence.

No, a President is not responsible for the actions and statements of his millions of followers. He did not make David Duke nor has he embraced him or others like him in any way.

But what he has not done is clearly and unambiguously disassociated himself from them. How can he since they agree with his words and his policies? He is their image. They made him politically which is why he refuses to distance himself from them, ever.

He must know that his words, not just the literal phrases, but the context in how he uses them, reverberate and echo long and loudly not only to the millions of his followers who make up his base, but those people on the fringe who love every angry slur that demonizes people who might feel their home is a dangerous place to raise a family.  He must know that his words are promoted by the real bigots such as Duke and find their way into the minds of those like the bomber and the vicious Pittsburgh slaughterer.

He must know that those very words, those very tweets calling the media the enemy might make powerful emotional fodder to get out the vote, but they also create a cause, whether intended or not, for those who want to change the world--now and with their own hands.  Why would it not? We destroy “enemies of the people”, don’t we?  And if the nation’s leaders don’t do so, why shouldn’t those who feel it is their personal mission?

Things don’t just happen by accident.  Last week, Trump publicly questioned whether the “bombs” were real and blamed the media and the democrats for using them for political advantage. In doing so, he openly stated that it took the attention away from the mob of central Americans who were invading our southern border. Think about it: He was essentially saying--how dare the liberals create a campaign issue involving sending bombs to former presidents and others when he is gaining momentum at his rallies by using the “bad” people threats of brown people?

Nor was it surprising that now some far-right conspiracy theorists are recklessly spinning the prospects that the real culprit is none other than George Soros, who happens to be Jewish.  The theory goes that Soros funded this “invasion” and funded the “fake bombs” operation, even though he sent a bomb to himself.  Even after all the evidence became apparent that some very avid Trump fan committed this heinous act, that is not really evidence. No, these people are pushing that the nut, Caesar, was working for Soros. Forget those angry social media posts and threats over the past couple of years, forget the fingerprints and other forensic evidence, these people want to believe that a greater, global force, with real power is behind the attacks.

But, why shouldn’t these far-rightbelievers, nott accuse the Hungarian Jewish billionaire? After all, they cite he has paid actors in the past, so surely, the bomber would be an actor too.  They cite an online image purportedly showing the bomber was one of those actors, although they fail to realize that the site in which this information is hosted as been vehemently and often labeled as a fraudulent site.

Do we blame Trump? Well, he has not tweeted out this theory or mentioned it. But he has added fuel to the fodder by, without any apparent evidence, pinned the “invasion” on Soros.  But not just upon the billionaire:

Here’s Trump at the White House this past Friday.

President Donald Trump: “I like the globe, too. But we have to take care of our people. We have to. Globalists.”

Crowd of supporters: “Lock him up!”

Of course, Trump is not the only one who uses Soros as the mastermind behind the liberal causes. Nor is it surprising that his loyal followers with tremendously sizeable digital megaphones, such as Lou Dobbs, frequently re-circulate the president’s unproven declarations

Words do matter. The words of CNN, MSNBC matter when they continuously blast the President for one lie after another, for one deception after another and one insensitive moment after another. They matter when the panel of experts opine about facts which might or might not be correct. Words of Fox News matters when they repeat the “false flag” theories as they are fact.

Words do matter when Maxine Waters tells people to get into the faces of Trump administration. They matter when Hillary Clinton says that now is not the time to be civil because the other side, she says, wants to destroy the Democratic Party. They matter when former Attorney General Eric Holder stupidly rebukes Michelle Obama's sentence by saying "we kick them" (although immediately in the next sentence he said he was talking figuratively).

Trump and others are not alone. And like Trump, I don't believe any of the above is promoting violence, I think all of them were speaking symbolically. Still, when our leaders make these statements that border on violent, they give fodder to opponents who are keen to ensure they explode.  They are given even greater weight when angry activists do engage in uncivil conduct, regardless of the intended purpose of the speaker.

Words do matter when people like Rush Limbaugh, Hannity and others just throw out conspiracy theories linking one loose end to another yet fail to take responsibility for their own thoughts and emotional tirades.  And when they are called to the table for promoting totally absurd information, they are defended as “entertainers”, not “journalists”—as if they can launch any attack regardless of real facts.

Words do matter when Donald Trump, the man who promised to bring the people of this nation together, as only he could, primes the pumps that deliver the boiling hot water to angry hateful digital leaders with followers in the tens of millions, throughout the nation and the world.

Words do matter when the President’s own statements and tweets somehow reach the minds of those who are sufficiently angry and emotionally unstable, who say to themselves and to the world that “only they can do it” and they do it.

Over the next week, they matter more than ever before.

And all of us, are responsible for what we say and how we say it.

More in this category: « Trump taking decisive action to stop the army of migrants Clockwork Orange is the new America »
back to top