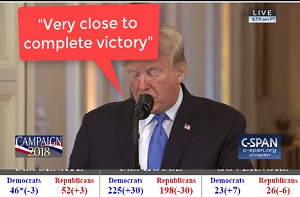 “You must leave now, take what you need, you think will last, but whatever you wish to keep you better grab it fast.”The lyric from Bob Dylan’s “It’s All Over Now Baby Blue,” aptly describes Donald Trump’s position now that the House has flipped blue. The president is in trouble, and his friends know it. They’ve even created a new disease, Presidential Harassment Syndrome, to describe the psychosomatic contagion Republicans are fearing after Tuesday.

While it worked for the Senate, the incendiary, questionable, and irrational false diatribes from the stump helped the opposition win the House. Thoughtful people, in ever greater numbers, as is evident, are starting to flip the dial on Trump’s show out of frustration from all the whining. The media isn’t Trump’s enemy, but he is, and he appears intent on self-destruction in a tragic way due to an obsessive compulsion to say anything in the moment.

Not content with a decent intermission after an interminable electoral battle, Trump took to the podium and showed, further, how he can’t rein in his impulses, even after winning. In a pique of anger, the president watched as a female staffer accosted a reporter, seeking to rip a mic out of the journalist’s hands, following a question Trump didn’t like. It was a distasteful moment.

Defiant, Trump threw a gauntlet down and declared any attempts by Democrats to investigate him or his businesses would bring a “war.” Surely, the big blue wrecking crew trembled at the thought of “No More Mr. Nice Guy.” Trump keeps spray-painting red arrows toward his vulnerabilities, so big they are visible from space. It’s a self-defeating strategy and the architects should re-examine its cost to benefit ratio.

The strangest part of Trump’s victory lap was the president’s assertion, in reply to a question about the example he sets, that he considered himself to be a moral person. It’s the kind of question that deserves no reply because to mount a defense, usually, implies the declarant isn’t remotely what he says. It was an unforced error, however understandable.

Trump, also, fired beleaguered attorney general Jeff Sessions on Wednesday. The A.G.’s only offense was following the law and recusing himself from overseeing a probe in which he was, at the very least, a percipient witness. Even Session’s critics, and they are many, think he was badly treated, and firing him won’t stop Robert Mueller’s eventual report. The move was an untimely blunder that only made Trump look guilty, of something, again.

It’s not going to matter to the faithful whether Russia aided Trump win the 2016 contest, which every responsible authority said happened. He has bragged about their ability to tolerate anything he does, but the numbers are arraying against the president. So is a new generation of blue politicians who were born after the era Trump so ardently yearns to resurrect. To them, he represents a past that needs to be boxed up and stowed in the attic.

More in this category: « Media, Acosta's treatment of Trump in post-election presser, a new low Democrat's blue wave and Trump's scorched earth »
back to top