Here’s the answer to the Trump, Chuck and Nancy Border Wall shut down game Featured 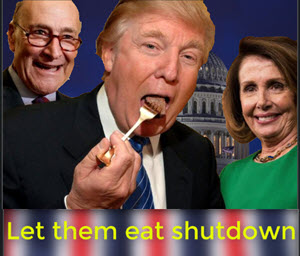 So you want to know how we should fix this crazy DC shutdown?

I'm glad you asked. It's really simple. It's amazing that the protagonists just don't see it the way I do. Here’s the plan:

First, let me side with the Democrats on the proposition that we shut down the shutdown.  We can get the FDA working, our airports out of fear, our government contractors paid and all of the many obligations that the federal government has assumed now for decades, back on the job.

Yes, doing this takes away leverage President Trump currently owns--either we pay billions for his pet project, or we shut it down. And yes I think we all know that this will not make his loyal supporters happy. Nor will it please Rush Limbaugh and Hannity and gang. But what it will do is to allow the parties and the players to focus upon those issues that really require scrutiny.

Because Donald Trump has made the wall, actually Mexico paying for the wall, a signature issue, The question of border security has become cemented into our brain. What we need to do is separate the politics from the facts. Claiming a wall across the entire border is absurd. So is stating that a wall would not help us protect ourselves. There is plenty of middle ground if we don’t wall ourselves from compromising.

The key to the success of this plan is open hearings. The type of hearings where our lawmakers ask questions, not make presidential campaign pitches. We need facts. Since the public appears to be very motivated to resolve the wall issue, it can be done. But, it cannot honestly or fairly be accomplished if we lack the details, the information, the truth.

We need to take the personalities out of the conflict. In my opinion, Trump and Mike Pence cannot be believed. Pelosi and Schumer, the Nancy and Chuck roadshow also has its own issues. As Trump pointed out during his address last night, Chuck once wanted a wall. Now, Nancy claims a wall would be immoral.

While public hearings are not detached from Presidential and Congressional control rooms, they would at least address some of the real issues in this governmental nightmare. Republicans insist that Democrats don’t have skin in the game, that they are not for national security if they don’t support Trump’s wall.

Democrats insist that Trump’s wall is a political ploy for a road to re-election.

They throw facts at us and we try to fact check them, the best we can, depending upon the news network of choice. The only way to destroy misconceptions is to get the facts.  We don’t believe Trump or Chuck and Nancy. We don’t believe the talking heads. We can believe experts and witnesses under oath telling us and showing us why one technology is preferred over another, why one solution might work and another not work.

And lastly, from their testimonies, we can determine where a wall must be placed, should be built, or, not constructed at all.

We're told that the agents at the border want the wall and believe that the only way that we can secure the border is with the structure. Perhaps they are right. But, I want them to be questioned and their assertions dissected and scrutinized.

We need to know how the drugs are entering into the United States? Donald Trump told us that 90% are coming from the southern border. Others are denying this assertion and claiming they are coming by air, by ground by the sea.  We’re told that tunnels can be built under the wall, ladders can be built, leaving these structures vulnerable. And, we are told that a very small fraction of these killing field opiates are actually being smuggled in the open land and waters but, are secretly being transported through the ports of entry. Who is telling the truth? We need to know.

What is wrong with getting information? Republicans seem to love hearings when it involves questioning Comey and gang but run away from them when we deciding upon healthcare or tax reform. Not a single hearing was held for either and now, they are trying to do the same with a major chunk of money.

Democrats don’t mind resolving the wall issue but prefer a more global approach. They want to throw in DACA as a trade. While that might make for good policy, it does not answer the question whether the wall would be necessary, in whole or in part, in the first place.

The Democrats can’t say that walls, fences or similar structure do not work. They do. The facts and common sense tell us so.  The issue for me, however, is simple--Is there any combination of technologies and solutions that can do a better job at less cost.

I'm all in favor of a wall or barrier if it is truly needed.  I want to be convinced, not ridiculed for questioning the feasibility. I want to know where would they work better than any other solution. I want to know where can we protect our nation by using other technologies and alternatives. I want to know if the other solutions would work equally or better than a physical structure and at a lower cost.   The southern border is long, wet in some places, dry in others. Some places are high, some low. Some highly populated, others, not. A one-plugin-fixes-all solution might work, then again, maybe not. However, targeting the cement and the steel where they are absolutely needed makes much more sense.

We can’t just grant the President a blank check because he made a phony promise that Mexico would pay for the wall. Nor can we deny physical protection, simply because the president wants it.

The games must end. Trump said he would assume responsibility for the shutdown. How can he be sacred to his false promise of a wall but not his word of responsibility?  Claiming that a shutdown could go on for months or years might make for great TV, but, is he going to pay out of his own pocket, all of the contractors, the government employees being furloughed, those working at no pay, until this political beef is cooked, digested and gone?  The game is silly and more than that, hurtful.

Likewise, Democrats can’t deny security if and where it is needed. If physical protection is the only way to ensure our borders cannot be penetrated, then physical protection, we must.  They must forget that it is Trump making the demands.

So, that’s my plan. It’s time for the adults in the room to start acting like it. It’s time to call off the political dogs and get this country back to work. It is time for real Americans to see and hear the experts, not feed our respective causes because our political futures depend upon it.

The president says “trust me”.

How can I until I know the facts?

More in this category: « House run by "mother of all" crazies, Nancy Pelosi, with Tlaib, Johnson trailing Mr. Trump, Build up that wall, declare a national emergency »
back to top