Trump to his Intel: Get thee back to a schoolery 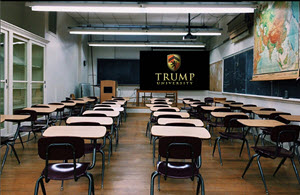 For those keeping score, the American Foreign policy and intelligence Super Bowl reveals that the President's Intel Chiefs are not willing to be benched as to the way they see the world.  However, the President hired them all and can fire them all without cause. And he can publicly insult their individual and collective intelligence as he has done to others in his administration who have disagreed with him.

For proof, all one needs to do is check out President Donald Trump's latest tweets today in response to a Congressional hearing in which the "all the president's men (and woman)" obviously views the world differently from their boss.

When declaring he was immediately going to pull the US out of Syria, the president claimed the US has defeated ISIS.  In addressing North Korea, Trump has paraded his love-fest relationship with Kim and suggesting it is producing great and promising results.  He claims that Iran is virtually on its economic deathbed.   And, just this week, he noted on twitter that the cold arctic weather is proof that there is no reason to worry about global warming. He has previously called climate change, a hoax.

Obviously, this is not exactly the way the intel professionals see the world of today.

For example, at the public hearing, Director of Intelligence, Dan Coats said, “"We currently assess that North Korea will seek to retain its WMD capabilities and is unlikely to completely give up its nuclear weapons and production capability because its leaders ultimately view nuclear weapons as critical to regime survival”. The CIA Director Gina Haspel concurred acknowledging a warming of relationships between the two countries but stating right out that “"is committed to developing a long-range nuclear-armed missile that would pose a direct threat to the United States”.

ISIS
Coats released on Tuesday the  Worldwide Threat Assessment, released by Coats stating "ISIS will seek to exploit Sunni grievances, societal instability, and stretched security forces to regain territory in Iraq and Syria in the long term”.  Coats also said  ISIS "very likely will continue to pursue external attacks from Iraq and Syria against regional and Western adversaries, including the United States" and that “"ISIS is intent on resurging and still commands thousands of fighters in Iraq and Syria”.

On Iran, Coats said "While we do not believe Iran is currently undertaking the key activities we judge necessary to produce a nuclear device, Iranian officials have publicly threatened to push the boundaries of JCPOA restrictions if Iran does not gain the tangible financial benefits it expected from the deal”.

The President has already said he does not agree with his own administration’s scientists assessments. In a written assessment of the threats, his government stated yesterday, "Climate hazards such as extreme weather, higher temperatures, droughts, floods, wildfires, storms, sea level rise, soil degradation, and acidifying oceans are intensifying, threatening infrastructure, health, and water and food security," the assessment read. "Irreversible damage to ecosystems and habitats will undermine the economic benefits they provide, worsened by air, soil, water, and marine pollution”.

The President today took issue with his staff's profesional opinin. In a series of tweets, Trump said the following:

When I became President, ISIS was out of control in Syria & running rampant. Since then tremendous progress made, especially over last 5 weeks. Caliphate will soon be destroyed, unthinkable two years ago. Negotiating are proceeding well in Afghanistan after 18 years of fighting..

Fighting continues but the people of Afghanistan want peace in this never ending war. We will soon see if talks will be successful? North Korea relationship is best it has ever been with U.S. No testing, getting remains, hostages returned. Decent chance of Denuclearization...

.Time will tell what will happen with North Korea, but at the end of the previous administration, relationship was horrendous and very bad things were about to happen. Now a whole different story. I look forward to seeing Kim Jong Un shortly. Progress being made-big difference!

The Intelligence people seem to be extremely passive and naive when it comes to the dangers of Iran. They are wrong! When I became President Iran was making trouble all over the Middle East, and beyond. Since ending the terrible Iran Nuclear Deal, they are MUCH different, but....

...a source of potential danger and conflict. They are testing Rockets (last week) and more, and are coming very close to the edge. There economy is now crashing, which is the only thing holding them back. Be careful of Iran. Perhaps Intelligence should go back to school!

Trump did not state which school they should attend. Presumably, he's not suggesting they take courses at Trump U.

More in this category: « Don't blame or taunt Trump for shutdown lift; Time to get serious & negotiate Drugs, Trump and the Right's emergency call for wall »
back to top