Drugs, Trump and the Right's emergency call for wall 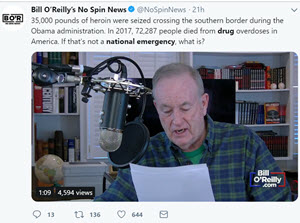 As predicted, a major drug bust takes place at the southern border and the Donald Trump relief force and the build-a wall-or-else-crowd goes into high gear.

From Bill O’Reilly to members of the Freedom Caucus to the MAGA HAT crusaders--the cry has been very succinct: If the smuggling of drugs that could kill 57 million people is not a national emergency, then what is?

In other words, drugs are flowing in from the border, it is killing us in New Hampshire to Louisiana and we need Donald Trump to declare a national emergency so he can divert money to build his wall which Mexico won’t pay for, nor will Congress.

Let’s face it. This is the message, loud and clear. Drugs equal emergency equals wall.

However, none of these folks from what I have seen or read, including our own Louisiana Congressmen and certainly not the national GOP leaders are stating the facts that are not inflated to achieve an end result. Those true facts are—drugs are flowing through our Southern borders, mostly through the ports of entry and a border wall would not impact that particular flow at all.

Indeed, if there is a national emergency, it is very clear—we need to strengthen those ports of entry.

Here are just two citations supporting the position that it’s the ports not the prairies that are killing Americans:

►Drugs entering the USA across the southern border are most often hidden in legal shipments.

Trump has suggested that the flow of heroin into the United States would be stanched by his border wall. He’s right that 90 percent of heroin enters through the southern border. However, according to the Drug Enforcement Agency, “illicit drugs are smuggled into the United States in concealed compartments within passenger vehicles or commingled with legitimate goods on tractor trailers.”

In other words, a wall wouldn’t stop most heroin from entering the country. And arguably, resources spent on the wall would divert from other enforcement mechanisms, such as more officers and technology at ports of entry to scan vehicles for drugs.

Among experts, there’s a consensus: Tougher border security measures, like a wall, don’t have much of an effect on drug trafficking. A 2013 report by journalist Reed Karaim summarized the general view, following years of border security buildups:

Most border security analysts say there is little evidence the buildup has significantly reduced the availability of illegal narcotics in the United States. The U.S. Drug Enforcement Administration (DEA) has cited reduced use of some drugs, especially cocaine, as proof the buildup is working. But other drugs have grown in popularity, and smugglers have proved adept at shifting their methods and locations in response to interdiction efforts.

It’s hard, given the nature of the black market, to draw up any hard numbers showing this, but the best data we have comes from the federal government. As the DEA concluded in 2015, drug traffickers “transport the bulk of their goods over the Southwest Border through ports of entry (POEs) using passenger vehicles or tractor trailers.” Wilson further clarified that while marijuana is often trafficked in the areas between official crossing points (which a wall would cover), harder drugs like cocaine, meth, and heroin mostly come to the US through the legal ports of entry.

“If the goal of border security policy is to cut into drug trafficking, the investments would be better made at the ports of entry,” Wilson said. Indeed, some of that work has happened in the past few years — with more personnel, drug-sniffing dogs, X-rays, better electronic records, and other technologies that can help catch drug traffickers.

So, to me, this is the real question—why won’t the president, his staffers, his Congressional lackeys, his right-wing media "yes-people" refuse to state the truth—“yes, Houston, we have a problem, and at the very minimum, we need major funding to stop the port of entry smuggling”.

Why are they silent and never seem to utter the words “ports of entry”?

The answer is obvious: Providing real facts diminish Trump’s crown trophy which he misled the American public, claiming Mexico would pay for it.

If a national emergency call is absolutely needed, then call it for the right reasons. Drugs kill and drugs flowing through the ports are real killers. But, don’t try to pull the wool over the eyes of Americans who know better and understand cause and effect.

In reality, the people weak on the border are those who want a medal rather than a real fix.

And, the reality is—I am in favor of a wall or a fence, a gate, a street barricade, whatever it takes, in those places our experts tell us that one is absolutely needed and no other remedy would better apply.

And I am in favor of providing essential security, whether it gives Trump a needed political win or it doesn’t.

More than anything else, I am for the truth, something that is in short supply at the White House, something a wall would not, nor ever fix.

When Trump and his legion begin to tell us the truth, that a wall is needed in places and that drugs come through our porous borders but that the real issue is the ports of entry, then I will listen.

Until then, no more of your propaganda.

Which is what it is, nothing more, nothing less.

More in this category: « Trump to his Intel: Get thee back to a schoolery In early morning jackboot raid, was FBI after a Stone-cold terrorist? »
back to top