Fox News is the only balanced cable network for Trump-Dem, presidential debate 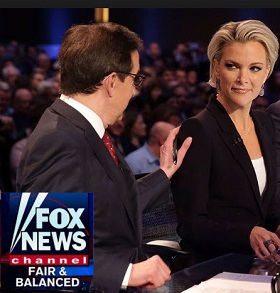 It should come as no surprise that the Democratic Party will not allow Fox News to host a presidential candidate debate for the upcoming 2020 election. According to Democratic National Committee Chairman Tom Perez, “Recent reporting atThe New Yorker on the inappropriate relationship between President Trump, his administration and FOX News has led me to conclude that the network is not in a position to host a fair and neutral debate for our candidates. Therefore, FOX News will not serve as a media partner for the 2020 Democratic primary debates.”

It is a predictable that Perez cited The New Yorker, which is a very liberal magazine, for his decision. In reality, Fox News is only cable network with ideological balance. The network gives plenty of exposure to liberals and Democrats and employs contributors, hosts and reporters who are very critical of President Donald Trump.

This decision indicates that Democrats are not looking for any fair treatment from the media. They want the usual, positive coverage, which will focus on unhinged criticism of President Trump, instead of a real analysis of Democratic Party policies and disagreements among candidates.

Democrats will hold 12 presidential debates starting with a MSNBC debate in June. In July, CNN will host their first debate and it will be interesting to see if any of their analysts give advance copies of the questions to any of the candidates. In 2016, CNN analyst, Donna Brazile, tipped off Hillary Clinton with the questions before her debate against Senator Bernie Sanders. This bias should have disqualified CNN from ever hosting another Democratic Party presidential debate, but, of course, since the network spends 24/7 bashing President Trump, they have been forgiven.

Regarding President Trump, the respected watchdog group, , reported that 95% of his broadcast network news coverage is consistently negative. Former CBS reporter Lara Logan, admitted in an interview that at least “85%” of reporters are “registered Democrats” and are “mostly liberal.”

With this overwhelming bias tainting his coverage, President Trump should carefully consider whether he will agree to any debates with the Democratic Party presidential nominee. In response to Perez’s decision, the President tweeted, “Democrats just blocked @FoxNews from holding a debate. Good, then I think I’ll do the same thing with the Fake News Networks and the Radical Left Democrats in the General Election debates!”

The President has a very legitimate concern for presidential debates in previous years have been moderated by leftist anchors with an agenda. It will difficult for the President to find any fair journalists working on any of the networks other than Fox News. So, if the Democrats refuse to enter a debate with a Fox News anchor and the President is insistent that he will not be subjected to “Fake News,” there may not be any moderators that Republicans and Democrats can agree upon. The 2020 presidential debates may not happen or may be radically different. Stay tuned.