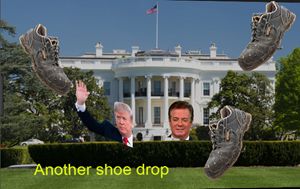 Paul Manafort should remember March 11, 2019 and perhaps Donald Trump might too.

Today is the day that Paul Manafort was sentenced to a total of 7.5 years for crimes prosecuted by special counsel Robert Mueller. Perhaps conveniently arranged, Manafort has just been indicted by Manhattan District Attorney Cyrus Vance for "a yearlong residential mortgage fraud scheme through which Manafort and others falsified business records to illegally obtain millions of dollars."

While the charge is unrelated to the Russia probe, it could impact President Trump’s decision whether to pardon Manafort for his federal crimes. If convicted, Trump cannot receive a presidential pardon for any state crimes.

The president has not yet responded on twitter regarding the Manafort sentencing or the new Manafort charges.

Those new charges are another legal shoe drop for President Trump in his home state, New York. Yesterday, the state Attorney General, Letitia James subpoenaed two banks for records relating to financing of four major Trump Organization projects and a 2014 effort to buy an NFL team.

AG Letitia James had previously said she would investigate "every dealing" Trump ever did when she took office.