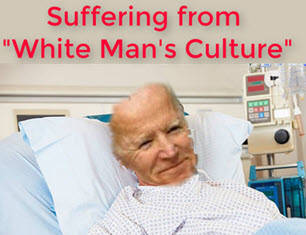 It looks like Biden is about to launch his third presidential campaign, despite the fact that he is “male, pale and stale.” In a Democratic Party that is catering to women, minorities and young voters, Joe Biden is a throwback to an earlier era.

How does this 76-year-old become relevant in the Democratic Party of today? In a recent speech, he claimed that he was the most “progressive” candidate in the race, even though he does not have the far left voting record of a socialist like Senator Bernie Sanders. If he officially runs, Biden will spend the entire campaign moving to his left in an attempt to appeal to the progressive base of the Democratic Party.

Another surefire way to gain support is to apologize for his race and his past sins. At a speech yesterday at the “Biden Courage Awards,” the former Vice President claimed that his country suffered from “white man’s culture.” He focused on the Senate Judiciary Committee hearings of Supreme Court Justice Clarence Thomas.

According to Biden, the ridiculous and unsubstantiated claims of Anita Hill were not given the proper respect by the “white guys” on the committee. He said that Hill had “courage” to discuss her “experience being harassed by Clarence Thomas.” He also said that she “paid a terrible price” and was “abused” and that her “reputation was attacked.”

In Biden’s warped view, Hill was the victim and Thomas was the culprit. In contrast, the real “courage” was displayed by Clarence Thomas. He refused to back down from these scandalous charges. He fought for his reputation and labeled the entire process “a high tech lynching.”

Similar to Dr. Christine Blasey Ford in the horrific Kavanaugh hearings, Hill presented no proof to the committee that could substantiate her claims against Thomas. It was a case of “he said, she said” and Clarence Thomas strenuously denied her accusations.

If there is anyone who deserves an apology after 28 years it is Justice Thomas, not Anita Hill. His well-earned reputation was destroyed by Hill and the Senate Judiciary Committee Democrats who were trying to “Bork” him just like they did to 1987 Supreme Court nominee Judge Robert Bork. Democrats slandered Bork and were able to defeat his nomination. Fortunately, Thomas persevered and saved his nomination and has served admirably on the Supreme Court ever since, in spite of unfair opposition from partisan Democrats like Joe Biden.

More in this category: « Desperately seeking the truth within the Trump-Barr, Mueller report Dems know "GREEN" Alexandria Ocasio-Cortez gives them bad DEAL »
back to top