Kennedy's silence about "Grab them by the P" prez, is creepy 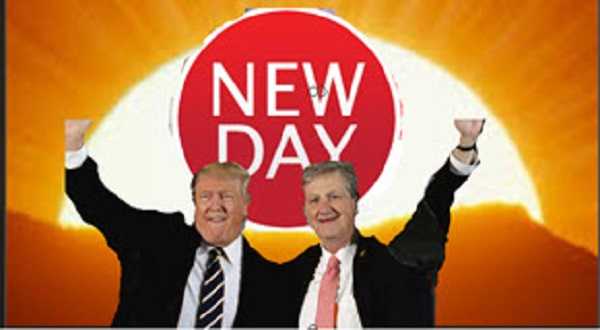 Okay, this is going to bring out all the foaming-at-the-mouth Trump supporters. But go ahead, give it your best shot. (a) I am used to your blind, hear-no-evil, see-no-evil, speak-no-evil unwavering devotion to anyone who speaks the same hate-filled “all-hat-and-no-cattle” rhetoric as you and (b) I don’t really care because I would rather stand up for decency, honesty, and respectability than to curry favor with any of you.

Having said that, I can now turn my attention to Mr. Hominy and grits, Mr. syrup for brains, Mr. Hypocrisy himself, aka Louisiana’s junior senator John Neely Kennedy, for his latest sound bite for the TV cameras.

It’s been said that the most dangerous place in Washington, D.C. is to stand between Kennedy and a TV microphone but to tell the truth, his down-home, aw, shucks B.S. is starting to wear just a little thin, especially with his latest PROCLAMATION.

Before going any further, a disclaimer is called for here. I am not a Biden fan necessarily, although I do certainly think he is far superior in intellect, honesty, decency and experience than Clown Prince Trump. Personally, I feel Biden, like Bernie Sanders and a few others (including Trump) are too old for the rigors of being the leader of the free world—if one could indeed call Trump a leader, which I certainly do not. (I’m 75, so I don’t believe I’m necessarily guilty of age discrimination in saying that—just realistic.)

But for Kennedy, a one-time fairly liberal Democrat just in case anyone needs reminding, to call Biden “creepy” and at the same time endorse and embrace every utterance and act emanating from Trump is indisputably the height of hypocrisy, duplicity, and evidence of a lack of a real moral compass. If Kennedy had an ounce of self-respect as opposed to a ton of ambition and ego, he would distance himself from Trump, who is on record, courtesy of the ACCESS HOLLYWOOD tapes, saying much, much, MUCH worse than anything Biden has ever said or done.

Trump’s payoff of Stormy Daniels and Karen McDougal were to cover up adulterous affairs and despite claims by Trump apologist (creator, actually) BREITBART, were most definitely not “private transactions.”

Yes, Biden crossed a line—several times. Women, for the most part, are just not comfortable with touchy-feely men and men should respect that. He also should apologize and not just slough it all off by saying he will change his behavior, as he said today.

At the same time, I cannot help but feel that with the manner in which Russia took over social media in the 2016 election, that this entire Biden business would never have surfaced had he not been the leading Democratic challenger to Trump. Now, whether some kind of character assassination was carried out by Trump or by Biden’s Democratic challengers is not certain but rest assured it was just that—a character assassination or as it is better known, dirty politics.T THIS AD

And it’s not the last such event that we’ll see in the upcoming presidential election. There will be others, lots of others.

Some might even say what I’m writing here is a character assassination of Trump.

Except he doesn’t need my help. He has a very rare affliction: every time he opens his mouth, he shoots himself in the foot. Very rare indeed. He is his very own walking, talking character assassination.

But this little rant is about Kennedy. If he is a true Trump loyalist, and I have no reason to doubt he is, he should never have opened that little can of worms.

After all, those who live in glass houses shouldn’t throw stones.

And Kennedy just heaved a big one on behalf of the resident of a very large but fragile glass house.

Maybe Kennedy, for once in his ego-driven life, should just shut the hell up.

More in this category: « POLLS: Trump at 56 in Louisiana, 50 Rasmussen, down in key states Fox News must heed warning signs not veer left onto danger »
back to top