Mueller Time but Trump claims "nothing changes" from report; Really? 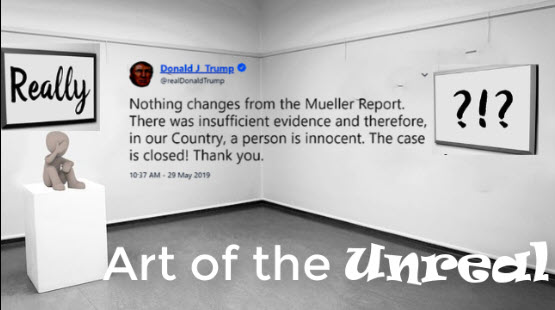 Today it was Mueller Time's time in the barrel.

Finally, we discover that Robert Mueller really does have a voice. He's not just some guy walking down some federal hallway. And, his voice, as I always thought would be an honest one.

"Nothing changes from the Mueller Report. There was insufficient evidence and therefore, in our Country, a person is innocent. The case is closed! Thank you."

WAIT. Read the president’s words. Did Trump tweet today that Mueller said “no conspiracy, no collusion”, "no nothing"?

No.  He said "there was insufficient evendence".

But two months ago, after Attorney General Bill Barr’s four-page summary letter, the president's and his loyalists mantra was, "no collusion, no obstruction, no nothing".  Then came the claim, absurd on its very face--Mueller exonerated”.

Anybody fairly looking at, hearing or reading Mueller’s words today knows that Mueller absolutely did not exonerate Trump on the issue of obstruction. Mueller made that plain as a white paint on a white wall.  To emphasize that very point, Mueller said again today that it would have been unconstitutional to indict and that the responsibility would be that of Congress.

Yet, according to Trump and followers, nothing changed.

Not quite. For onoe, Trump has finally told the truth about Mueller’s very words.  Never did Mueller say or use the words, “no collusion, no obstruction”, “no evidence of collusion” or “no evidence of obstruction”.  Instead, he used, as Trump shockingly but honestly pointed out, the special counsel said, he had “insufficient evidence”. Major differences.

As plain as milk on a white wall. You would think that no other than Bill Barr would no the difference since such distinction is Evidence 101 and after all, he is the main honcho, the voice of truth in the Office of the Attorney General, right?

But no. Barr prefers to use the "no collusion, no obstruction" word cereal. Or, as Barr has said, "no evidence".

So, before accepting the President and his attorney's and his White House parrot's words as they are repeated on Fox News that "nothing has changed", perhaps you might want to think again.  Not only did Trump use the "not sufficient evidence" words but a chasm as wide as two parallel walls have emerged. Barr and Mueller don't quite see things the same way. What Mueller sees and says is not at all what Barr sees or says or says that Mueller sees or says.

The reason that Mueller did not indict is not the same as what Barr claims Mueller said. Or, in so many words.

Let's think back. Let's revisit the Barr press conference on the day our Attorney General released the Mueller report. For those with good memories, the issue of the DOJ guidance came up.

Reporter: "Mr. Attorney General, we don't have the report in hand. So could you explain for us the special counsel's articulated reason for not reaching a decision on obstruction of justice and if it had anything to do with the department's long-standing guidance on not indicting a sitting president? And you say you disagree with some of his legal theories. What did you disagree with and why?"

Barr: "I would leave it to his description in the report, the special counsel's own articulation of why he did not want to make a determination as to whether or not there was an obstruction offense. But I will say that when we met with him, Deputy Attorney General Rosenstein and I met with him, along with Ed o'Callaghan, who is the principal associate deputy, on March 5th. We specifically asked him about the OLC opinion and whether or not he was taking a position that he would have found a crime but for the existence of the OLC opinion. And he made it very clear several times that that was not his position. He was not saying that but for the OLC opinion, he would have found a crime. He made it clear that he had not made the determination that there was a crime."

Now, compare that to what Mueller say today particularly as he is referring to obstruction of justice issue, discussed in volume two:

And in the second volume, the report describes the results and analysis of our obstruction of justice investigation involving the president.

The introduction to the Volume II of our report explains that decision. It explains that under longstanding department policy, a president cannot be charged with a federal crime while he is in office. That is unconstitutional. Even if the charge is kept under seal and hidden from public view, that, too, is prohibited. A special counsel’s office is part of the Department of Justice, and by regulation, it was bound by that department policy. Charging the president with a crime was therefore not an option we could consider. The department’s written opinion explaining the policy makes several important points that further informed our handling of the obstruction investigation. Those points are summarized in our report, and I will describe two of them for you.

First, the opinion explicitly permits the investigation of a sitting president, because it is important to preserve evidence while memories are fresh and documents available. Among other things, that evidence could be used if there were co-conspirators who could be charged now.

And second, the opinion says that the Constitution requires a process other than the criminal justice system to formally accuse a sitting president of wrongdoing. And beyond department policy, we were guided by principles of fairness. It would be unfair to potentially — it would be unfair to potentially accuse somebody of a crime when there can be no court resolution of the actual charge.

So that was Justice Department policy. Those were the principles under which we operated. And from them, we concluded that we would not reach a determination one way or the other about whether the president committed a crime. That is the office’s final position, and we will not comment on any other conclusions or hypotheticals about the president. We conducted an independent criminal investigation and reported the results to the attorney general, as required by department regulations.

Whoa!! I don't quite think Mr. Mueller and Mr. Barr are saying the same thing, do you? Clearly, Bill Barr and Robert Mueller have two totally different views about what the special counsel himself said in his report on this issue.   Perhaps, might this be one of the reasons Mueller wrote that "curt" letter as our AG called it?  The two men absolutely had different views regarding the path forward.  Barr absolutely is claiming that Mueller did not maintain that the DOJ guidance played a role in his decision.  But, anybody reading Mueller's report just once would know and now must now know that Mueller expresslly believed DOJ guidance was the reason not to indict. After all, he told us again today, as he did in his report, in black and white.

At the very minimum, Barr has some 'splining to do. How could he misstate Mueller's reasons for not indicting that were so clear that a blind law clerk would see and understand them? But, not the top law enforcement agent in the land?  Really? At best, and I am being mighty gratuitous here, to give Barr the benefit of the doubt, just maybe there was a misunderstanding of some sort. Kinda hard to believe there could be since the words Mueller wrote were so clear to read, that is, clear--if one read his report.  Maybe Barr misinterpreted Mueller's verbal statement. Maybe Barr asked Mueller, "Bob, but for the DOJ guidance, did you find a crime?"

Of course, Mueller's reply would be NO.  So, would that mean that Mueller did not indict because he was so, so confused about the facts,  about the law as Barr implied, that the former FBI director just said to Barr, "well, gee Bob, I don't know.  I just don't know. Your call".

NO. A plain reading of the facts would reveal at the very minimum, Mueller, as he said in his report and repeated today, did not go there. He did not go to even determine if a crime had been committed.

His obligation was to gather facts. If he felt there was a crime by somebody other than the president, and if it fell within his purview, he indicted. If not, he passed onto a US Attorney.

It is so clear that Barr felt that his job was not to report a crime that he felt might have been committed by the president. The constituion told him to "stay away, don't go there.Instead, pass any matter that concerns you that could be legal violation over to Congress and if they don't want it, then maybe some US Attorney might once this president is no longer possessed the White House keys".

Which is why Mueller distinguished volume one results from that of volume two.  On the matter of conspiracy with Russia, Mueller, after reviewing the evidence, that was available and that was not destroyed by witnesses, and after getting inadequate answers from a president who refuse to testify further, decided he did not have sufficient evidence to charge. Which also clearly means, if he had interviewed the president like he wanted to do and if the president had remembered those facts he says he forgot, if Mueller had thought he had enough evidence to charge, he would not do so.

Yep. You heard me. He would not charge. He was prohibited to do so.

But on obstruction, things were different. After outlining the facts as he knew them, he felt he did his duty. It was time for him to render a report. It would not be up to him to charge. Our founding fathers would not have liked that. Instead, all he could do at that time would be to pass his findings to the US Attorney General with the clear written instructions and desire to let Congress do what they are constittionally charged to do or not do.

Barr would have none of that.

Likewise, on the issue of obstruction, if he personally felt Trump had committed a crime, he would not assert so. He could not because the constitution prohibited himself in making this claim. He was not throwing up his hands, claiming, "gee, I just don't know what to think" as I believe Barr wanted us to think.

And, this is very important: Unlike the issue of conspiracy, he did not state that he had insufficient evidence. But, he did say that if he felt that Trump had not committed a crime, he would have said so.

Does this mean Mueller believes that Trump committed a crime of obstruction? Perhaps. But he did not state so.

Instead, on both issues, particularly that related to obstruction, he left up to Congress.

He surely did not write that the attorney general should make the call.

More in this category: « One Texas lone star, Rep. Chip Roy, saves US from disaster vote All the King's Men, Scalise, GOP, Dershowitz, more tweet after Mueller's talk »
back to top