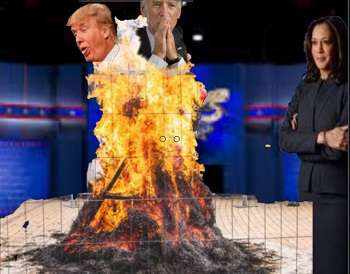 The fact is, on many issues, it’s necessary to work with others whose viewpoints on any number of topics are dissimilar. That’s how democracy works. Why Biden felt it necessary to raise the specter of the once ago South, by invoking the memory of segregationist Herman Talmadge, (D) GA, shows he was sleeping when Trent Lott, (R) MI, was forced out of his senate leadership role for lauding SC Sen. Strom Thurmond’s 1948 run for president.

Biden’s wheels, it’s apparent, are stuck in a rut on a road the railroad made obsolete long ago. He should quit now while he can do so gracefully. Imagine, for a moment, Harris on stage with Donald Trump. She’d have no lurking and pacing behind her the way Trump bedeviled Hillary Clinton during a debate last session. She’d be immune to the name calling, and there’d be no way for the president to escape her grasp of the law and his own studied indifference to it.

Considering Robert Mueller’s timid reluctance to call a spade a spade, what better candidate could the Democrats put forth than a seasoned prosecutor to lay out the case for a revival of American values, and benefits of a return to the rule of law. Harris could do worse than campaign on the slogan “Bring Back America” because what we’ve lost under the Trump presidency is a sense of compassion, common decency, and respect for one another. These are characteristics that once defined us but, regrettably, have fled from our land in which children are caged by the government like animals in a third-rate zoo.

We have, also, lost any sense of nuance. You are either a “winner” or “loser” in Trump’s America; there’s no in between, meaning most of us non-billionaires are losers. When Trump proclaimed that he loved the uneducated during the last campaign it was because he knew people find it easier to worship a golden calf than struggle with rules. It was easier to believe that he “alone can fix it” than to put shoulder to plow. The policies of the president have led us into a thicket of questionable dealings with traditional enemies, the embrace of a coarsened public discourse, challenges to the foundations of jurisprudence, and set us one upon the other, gladiatorial style.

To set things right, we do not need Joe Biden, we need someone who can articulate what’s wrong with the current administration, nepotism, self-enrichment, and disdain for anyone holding opposing viewpoints. To change course, the nation needs someone who will test the furies and make the case that Donald Trump is not the American he pretends to be. One person who can do that is Kamala Harris, and for that reason she bears watching.

More in this category: « Bye-Bye Biden, your record and gaffes, we know all so well Women and America attacked by Trump, he's not my type »
back to top