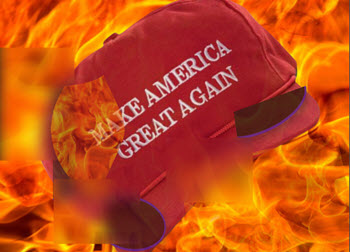 Last night, President Trump entertained 20,000 enthusiastic supporters in Minneapolis, Minnesota at the Target Center. Another 20,000 or more supporters were unable to get into the arena. The event was pure Trump as he excoriated Joe Biden and his son Hunter as well as the impeachment inquiry which is the latest Deep State and Democratic Party scheme to overthrow the 2016 election results.

Prior to the speech, Minneapolis leaders attempted to charge the Trump campaign over $500,000 for event security. After the President balked at such extortion, the event did take place, but, obviously, police protection was lacking outside the arena.

After the speech, protesters attacked Trump supporters. One rally attendee was hit by a pile of garbage and slapped in the face.  Over three dozen “Make America Great Again” hats were stolen and set ablaze in an eerie street bonfire. Among the ashes were vicious Trump hating signs.

Other members of the leftist mob overturned barricades, while some chased Trump supporters and even harassed innocent bystanders.

One local resident, Kali Finch, did not attend the rally, but was in the wrong place at the wrong time. She was trying to move through the area with her brother but was “shoved” and called a “racist” by numerous members of the left-wing mob.

Ironically, liberal Democrat Mayor Jacob Frey proclaimed yesterday “Love Trumps Hate Day.” However, for the leftist mob, there was no “love,” only “hate” toward the President and his supporters.

This type of chaos has been seen around the country after Trump rallies and at Antifa marches. The perpetrators of the violence are almost always left-wing agitators, not Trump supporters. Most are young, white liberals who are brimming with hate, possibly fueled by indoctrination at colleges and universities across the country.

Among the several hundred anti-Trump protesters were rabid communists. In fact, one protester felt comfortable enough to wave the flag of the People’s Republic of China. It was reprehensible for this protester to show any type of support for the communist Chinese, while they are repressing and brutalizing the courageous people of Hong Kong, who are fighting for freedom and singing our National Anthem.

As the flag of communist China was being paraded around the streets of Minneapolis by Antifa thugs, Trump supporters were waving American flags inside the Target Center.

The upcoming election will be one of contrasts: socialism vs. capitalism; and pro-America vs. anti-American. Voters need to decide what type of behavior to reward. If we elect an Antifa inspired candidate, our future will be bleak both economically and culturally.

At a very minimum, American voters should elect a President that loves our country as much as protesters demonstrating on the streets halfway around the world.

More in this category: « No country for old or corrupt men: Sanders, Biden, Trump, Giuliani saga History-deficient Trump teaches us "All Roads lead to DISASTER" »
back to top