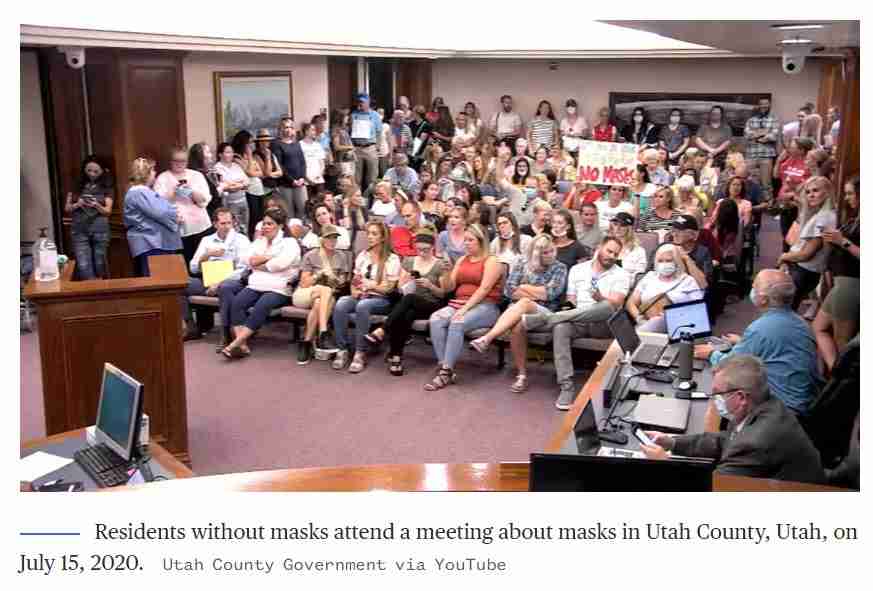 The United States, always considered to be exceptional, is now proving the description. We are indeed unique in the way we have mishandled the Covid-19 crises. While much of the world is seeing a somewhat minimal impact currently from the virus, our country leads the world in cases, hospitalizations, and deaths. 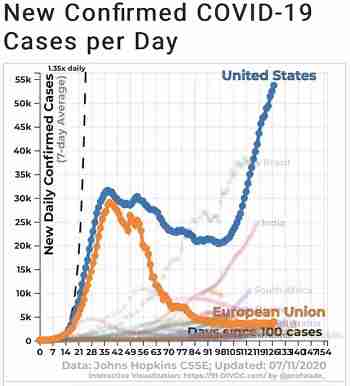 The person at the very center of this crisis is none other than President Donald Trump. Only he could screw up an emergency and make it many times worse.

He claims that the country is doing great in dealing with coronavirus, yet, I doubt that many scientists, experts, physicians would agree. They have roundly said just the opposite.

He wants to take the subject off the table. He repeats a concocted false narrative by stating the reason we have more cases is that we have more tests. This behavior is lunacy, and his supporters in the media are pushing the propaganda. No doubt, more tests will present more positive findings; however, he is intentionally leaving out some critical, vital statistics.

In quite a number of the states where the "cases" are skyrocketing, the rate of cases far exceeds the rate of tests(see image below) Also, the substantially increased hospitalizations are soaring, and so are the deaths. The crisis is so bad that some communities are calling in the mobile morgues. Are more tests creating more COVID hospitalizations and virus-related deaths? The logic of his argument is way beyond nonsense. 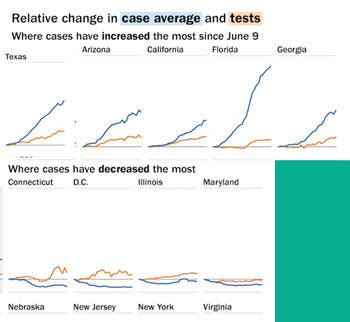 It did not have to be this bad, far from. However, Trump demanded that states open up before they were ready. He ignored his own experts' recommendations. As the nation's leader, he gave belief, passion, and anger to the anti-mask movement.

Think about it—while the medical experts, particularly his own, are begging people to wear masks, the President is promoting indoor Trump rallies without requiring masks and social distancing. He is showcasing practices that are a complete violation of everything we know that will work.

As I said weeks ago, the once-Coronavirus is now the "Trump Virus." He owns it. While New York, New Jersey, Connecticut, and other states have substantially reduced the number of cases, other localities are seeing the case and hospitalization explosions. His loyalists lead a number of those. They are supposed to be governmental leaders but have chosen to be more like Trump than Fauci. They closed late and opened early. They wholly ignored many of the CDC and the Trump administration guidelines. Some of the most fierce Trump defenders are standing in the way of solving the crises in their states. The Georgia governor is suing Atlanta for ignoring his anti-mask mandate, which disallows compelled facial coverings in cities and towns.

Our own Attorney General, obviously seeking to be Louisiana Governor Jeff Landry has opined that Governor John Bel Edwards mask mandates are unconstitutional.

There is no way possible that this country is going to get healthy until it masks up, engages in consistent social distancing, and is damn careful.

So many of the Trump loyalists are against mandatory masks, whether it is a city, state, or national in scope. In being so, they take away the most significant instrument in America's toolbox to combat the pandemic. Ask them, what are their solutions? Just check out social media, and you will get your answers. Many of those who slam mask-wearing in public, oppose social distancing, want to open up all businesses and schools regardless of risks to others. I have even seen some of their leaders sabotage the "contact tracing" by promoting online their refusals to participate. So, what are their solutions? I guess they will cite the Trump drug that keeps getting slammed by government experts and scientists. And, I suppose they believe the virus will just "magically disappear" as their leader claims. But, no masks, social distancing, contact tracing. Oh, and the vaccine? Just wait to see how some of them will criticize that, once if and when it is available. Again, I ask, what are their solutions to this national catastrophe? I'm waiting.

Yesterday, this act of defiance showed its ugly head in Utah. The Provo city leaders held a meeting to deal with the facial covering issue. Suddenly, anti-maskers showed up, without face protection. They packed the small meeting room. They were not there to solve the problem. They were there to rebel, show their defiance, not knowing if they were carriers and apparently not caring one bit.

They are the problem

And, I believe for many of them, the mask is not the issue.

"We are perpetuating a lie," one woman who said she has five grandchildren said. "COVID is a hoax. It's a lie. It's a political stunt," The Salt Lake Tribune reported.

Former game show host Chuck Woolery and avid Trump backer expressed his rebellion to millions. He recently tweeted, "The most outrageous lies are the ones about Covid-19. Everyone is lying."

Instead of objecting, the President of the United States retweeted the post. Again, instead of replying, something like, "Chuck, you are wrong, Covid-19 is not a lie. Everyone is not lying. Our experts are not lying", he spread Woolery's message to tens of millions of his base. No wonder we have an American disaster in real-time.

Trump is leading the opposition, casting doubt on his scientists, and is promoting conspiracy theories. The death toll mounts, and he is silent. His administration mantra? "Get used to it."

Sorry, I can never get used to the inhumanity. According to our Commander in Chief, we are at war with the virus. Yet, he is leading the battle against us. The President is supposed to act as the nation's Dr. Welby. He should provide comfort and prescribe the right medicines. But, he is promoting misinformation, supporting behaviors that will only prolong our collective miseries. Worse, it will make many of us sick, further damage our economy, and cause many of us to die.

President Donald Trump and many others who describe themselves as the "American Patriots" are quick to promote their defiance without providing us with how we can solve this deadly horror. Meanwhile, we experience the worse American health and economic crisis in modern American history.

Masks? Sorry, I cannot mask my anger, frustration, and contempt as to what I am witnessing.

It is downright sad.