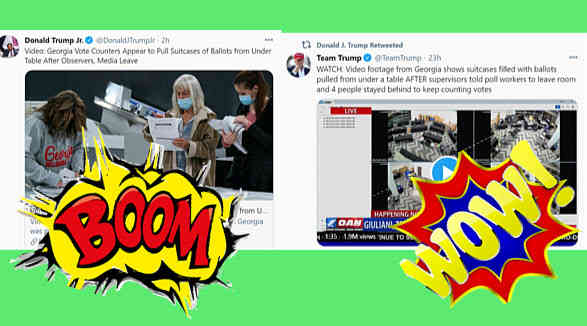 This one, however, seemed different. The new Rudy Giuliani evidence presented to Georgia lawmakers' conference room was not like the affidavits of nonsense the courts have rejected. It was a real-time video of election workers "caught in the act."

After reviewing parts of the video, my initial cautious reaction was, "Wow, someone's got some 'splaining to do." So, I scoured the Internet for "factual" information about the "earthshaking" video. I found nothing from the usual fact-checkers, Washington Post, NY Times. In fact, they didn't mention the video at all. It's was like the conference never even took place.

Nor did the night-time CNN and MSNBC talking heads even bring up the subject. Other stories made the anti-Trump turnstiles—covid, Trump's pardons, Dr. Fauci, and more. But, Rudy's latest hit from Georgia? Sorry. It wasn't on anybody's mind at the mainstream cable news.

Which dual reality world has left me more frustrated than ever. Ironically, it is almost impossible to get the plain unvarnished facts in this world of information everywhere. MSM normally ignores the pro-Trump version of news. The Fox-OANN-Newsmax-Qanon folks reside in Never-Never Land of Falseville.

This takes us back to the Georgia voting bombshell revelations. The usual right-wing channels' narrative is stunning, if accurate: Election officials kicked out the workers from the voting center but allowed pro-Biden folks to take out suitcases from underneath the tables. These contained thousands of ballots. The Biden folks scanned the ballots into the machine without any Republican scrutiny. Team Giuliani has presented this video to a national audience, has claimed it is overwhelming, irrefutable evidence of Democratic corruption. Without facts to the contrary, has America's Mayor produced the "smoking suitcase of voter fraud"?

Maybe. But maybe not.

After spending way too much time trying to get some "real facts," perhaps I got lucky. I happened across a fact-check from Lead Story that takes a dramatically different view of the Giuliani blockbuster.

Lead Story insists those weren't secret suitcases at all containers commonly used for ballots. This version claims what was done was in clear sight and that the Secretary of State investigation team is refuting the allegations as nonsense. In other words, what Team Trump has presented as the evidence that guarantees another four years might just be more of his own suitcases full of "testiphony".

Then, maybe it's not.

Here's the link to the article. Below is the debate. Tell us what you think.