Antifa vs. the Trump Patriots: The storming of the Capitol misinformation Featured 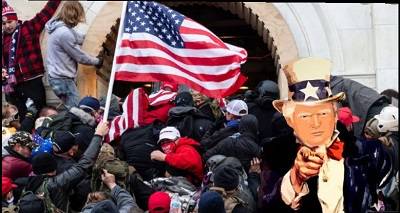 As soon as the TV cameras started to reveal our US Capitol under siege, the misinformation machine revved up its juices. Across social media, on Parler, Twitter, Facebook, in news articles, on radio and TV, the propaganda machine on steroids started to create alternative facts.

The narrative was the “Trump Patriots” did not jump the barricades and storm into the American Capitol, it was Antifa. The claims ranged from “the patriots could not be violent” to Trump supporters do not dress like hippies, Antifa does.  One claim I had read cited a completely false timeline in which the author insisted that the Trump supporters were not at the Capitol but watching Trump when the revolution began at our nation’s treasure.

I personally had a few encounters on social media yesterday about this very issue. One poster insisted that we are now discovering that it was antifa and that the news media blaming Trump backers, was fake.  I asked that person on a few occasions to provide evidence.  I’m still waiting.

Another clash went like this: The Facebook poster said Rep. Gaetz and other evidence is proving it was Antifa.  As a result of her assertion, I researched her claim and discovered that Congressman Gaetz gave life to the allegation.  While addressing the House of Representatives, he cited a Washington Times article that was later removed online because it was not supported by facts.

After the research I shared the link to my proof but my fellow poster refused to look at it, dismissing it altogether by simplifying identifying it as a “Fact Check”, thus could not be believed. The fact check was from USA Today.   She then essentially told me that she is going to believe whom and what she wants to believe.  She also said she wanted the country to separate, essentially, in her part of the country, she could read and believe her media and facts and I, at the alternative part of the country, could accept my own.

So, as you travel to the Silo America of your choice, here are factual updates about the Antifa-Patriot dispute.  Enjoy the read as your trip.

More in this category: « No masking over plague and pandemic impacts upon history Impeachment reality: Trump incited his so-called patriots »
back to top