Liz Cheney's "et tu Elise" moment is past, where does Trump take us now? Featured 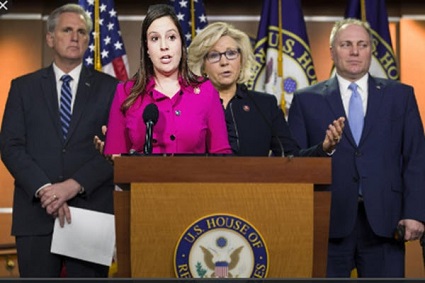 Where do we go from here? That depends upon knowing, just where are we now?

On Friday, Elise Stefanic got her “kiss the ring” opportunity showing her immense loyalty to the Mar-a-Lago Emperor for his elevating her to Cheney’s perch. The New York State Congresswoman is in perfect company with Kevin McCarthy and Steve Scalise.

Ever since McCarthy did his Mar-a-Lago backflip, and allowed a post-impeached embarrassed former president turn him and the rest of his party into doormats, the House Majority leader’s words have been meaningless. His remarkable utterance just this week that “nobody’s questioning the legitimacy of the election” deserves ten Pinocchio’s. Maybe fifteen. Why? Because he knows darn well that the person inciting the very questioning is no other than that “Other Guy” at control center.

Witness the “questioning the elections” vicious cycle: During one of his daily exhausts, Trump fumes election misconduct. His media and social media allies push his message. His flock claim the Biden administration is an imposter. Then, and only after they regenerate another BIG LIE, a party member like Liz Cheney responds with defending-democracy passion. When they call Trump’s bald-facer out once again, McCarthy and Scalise look uncomfortable. Trump revenge adrenalin soars and the now-disloyal republican head becomes a guillotine by-product.

Over the past five years, we have seen more party members be censured or cancelled simply because they refused to push Trump’s history rewrites. A vindictive royal snap of the fingers and the deed is done.

With President 45 running the show, you can bet more Republican political bloodshed is at the nearest horizon. Which then raises this issue--if "nobody is questioning the legitimacy of the election" when is McCarthy and those with political clout going to tell “Mr. Nobody SHUT UP with your stolen-election noise!! Enough is Enough!!"?

Not only did the former President form, incite, address the mob, not only did he light the flame, but he has obsessively fanned it non-stop. Perhaps hourly. McCarthy and gang know it. But his loyalists won’t rebuke the fan nor defend those who are smacked with its brutal pressure waves.

Now that Cheney has been removed, according to her replacement, the party is one happy family. It is not and it won't be. It cannot be if the vicious cycle continues. The more Trump brings up November 3rd, the louder we will hear about January 6th and his camp will never escape the blame for the chaos on the Capitol’s steps. As much as his spinmeisters try to turn an insurrection into day of tourists’ hugging and kissing, the intense anger will be the likely response.

It’s no mystery. Trump’s defenders want to rip January 6 off the calendar. To appear that the uprising is now long-gone, the party mantra has become: “we’re moving forward to defeat the Biden agenda, we’re not looking back, only the Cheney’s, the media and the democrats are dredging up that past”.

Sure!! Let me translate this for you: They really mean: “Our base adores him. We need him. He is the party. He is our fundraiser. We can’t cross him, for those who do, end up as roadkill."

Yet, until Scalise, McCarthy, Stefanik, Ronna McDaniel, GOP state party chairs stand up and proclaim that they refuse to carry his stolen election horse doo doo another second longer, the cycle will continue to roll.

Unfortunately, almost nothing will convince them to cancel his own false words. Not a taste of courage. Not a moment of honesty. Not a sense of morality. Almost nothing.

Only the fears of future political-power implosions, will.

Sadly, the party of family values is becoming a mockery. The more they abuse election history, the louder will be the laughter. They hope Trump will lead the charge to save America. He cannot even save them from the dark side of the Faustian bargain. Their legacies are being written now.

Tis a heavy price to be the alter-ego of a mad man.

More in this category: « Taking the Trump BIGGER BIG LIE oath Bent out of shape over Trump-GOP axing bipartisan Jan. 6 investigation »
back to top