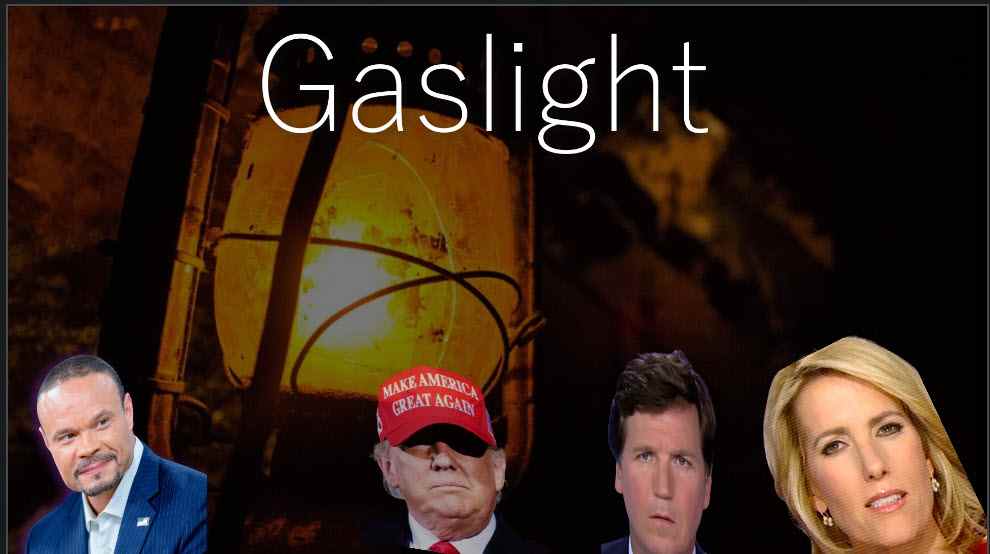 IT ALL SMELLS SO GASLIGHTING

Republicans, especially Senator Cassidy of Louisiana and Donald Trump of Conspiracy Land, are blaming the Democrats, President Biden, and the media for the recent rise in Covid-19 cases, hospitalizations, and deaths.

Cassidy, also a medical doctor, was asked during Fox News Sunday about the recent increase in covid incidents across the nation. Meantime, continuing his assault on the truth, Trump exploded another scud this weekend, designed to spray chaos, regardless of the outcome.

The Cassidy segment went as follows:

“Your state of Louisiana is the fifth lowest in vaccination rate. Only 36% of people in your state have been fully vaccinated. You're medical doctor, your thoughts about that about the resistance of the vaccine in Louisiana? And is there anything you can and plan to do about it?”

Sen. Bill Cassidy
“A couple things. First, people are surprised when citizens don't trust government when you have partisan comments coming out of the White House regarding next Jim Crow laws or people like Senator Schumer in the White House not cooperating on a bipartisan bill. Oh, we're going to be partisan, but over here, you better trust us. That just doesn't work. But I would also argue as a physician, you need to you need to go back to your health care workers. It shouldn't be the president advocating again, he's, he's he's he's depicting himself as Uber partisan. You need to have your doctor, your nurse, your your your physician's assistants, who's speaking to the patients they normally care for. They see at the PTA meeting, they otherwise communicate. This is good. It saves lives. What I'm doing, I'm trying to educate. Yesterday, one of my former students has a nice video--we're choosing between vaccination or accepting higher rates of death. I put it on my social media today, we're pushing that, that's our choice. You choose either to be vaccinated or to accept a higher rate of unnecessary death. That's the way to communicate through your physician, your nurse, your PA, etc. Not through some Uber partisan person who's, who asked us to trust them, except when they're making incredibly partisan statements.”

As if it needed any, Trump’s written statement then added comedy relief:

“Joe Biden kept talking about how good of a job he's doing on the distribution of the Vaccine that was developed by Operation Warp Speed or, quite simply, the Trump Administration. He's not doing well at all.

Cassidy is essentially arguing that his constituents, primarily Republican Trump supporters, are refusing to take the jab because Joe Biden made a controversial statement last week and because the president is being partisan on an unrelated issue, the infrastructure plan.
Imagine that!
Let’s put his comments into some perspective. Let’s imagine this scenario at home: Little Johnny asks daddy about the shot:

Little Johnny: “Daddy, when are you and Mom going to get vaccinated to protect us from getting covid? I don’t want to get sick, get hospitalized, or die. Some of my other friends say their parents have gotten that shot”.

Unvaccinated Dad: “Little Johnny, don’t listen to those other kids or “Ouchy Fauci”. We’re not going to take the vaccine because President Biden said our family and people like us are bringing back Jim Crow laws because we support election security. Plus, we think the Democrats and Biden are communists and are putting us in deep debt doo doo with their wish list that has nothing to do with real infrastructure--roads and bridges. My Lord. One thing “Dem social programs” have nothing to do with infrastructure, so, why trust Biden and his jabbers?”.

Little Johnny: “I see, daddy. But I thought this was President Trump’s vaccine.
He’told us, am I right? And what does infrastructure have to do with the vaccine and keeping us safe?”

My Lord. Little Johnny is precocious for someone so young, isn’t he?
Now let’s continue our imagination journey and listen to Biden and Trump slapping at the issue during an sometime in the future debate:

Trump: “Man, you’re not just sleepy, you’re dopey. Here I created the vaccines and you’re flubbing it like a dog”.

Biden: “Here’s the deal. When I took office, there was a distribution bottleneck. I got involved and now we have so much stock on the shelf, we’re sending it to India and other countries. And, hey man, you gotta be joking. While you’re getting some credit for the vaccine, look at what you’re doing to get your base to go to join the “got-vaxxed” team? Nothing. You and Melania hid getting the shot. And some of your buddies at Fox News won’t even disclose if they’ve been injected.
“Darn. You’ve been spending every waking hour screeching about voter fraud nonsense and those fake audits. If you’d spend maybe one-zillionth of that time promoting the vaccine efficacy and safety, maybe your folks in Red-Land USA would feel more comfortable. But you are not saying and they are not doing “squat” to protect themselves and the rest of us”.

Trump: “Had you and the media and the Democrats not stolen the election, I would be on Twitter and could tell my 80 million followers to “vax up”. But now, no Twitter. No Facebook. No YouTube. Just like the election, those have been stolen from me too. So, it’s your fault that they can’t hear my “get the “warp speed Trump” vaccine message. It’s on you all. As I said, you cheated, and they don’t trust you, the dems or your media lapdogs. Look at the Arizona audit and the latest from Georgia. Absolute proof of voter fraud. My loyal followers don’t trust any of you, so why should they trust the vaccine?”.

Biden: “Because you and Fox News said you made it. That’s why. Remember? You want the world to think you’re the lead "Operation Warp Speed" scientist, who acquired you scientific knowledge by osmosis from your brilliant medical specialist uncle.

End of debate. Folks, this is serious stuff. The election has zero to do with the vaccine’s safety. Back in November, Donald Trump claimed Pfizer and the gang wanted him to lose so they withheld the vaccine until after the elections. Now, he’s mum.
Jim Crow, the past elections, the infrastructure plan, and the media have nothing to do with refusals by the hard-right and some "nutcakes" left from accepting vaccinations. Those are more BIG LIES and the good doctor, Cassidy, knows it.
What’s scaring the anti-vax Trump supporters is much more sinister. Fox News, NewsMax, and Qanon Network are all promoting junk facts and science. It's Tucker Carlson and his ilk telling their audiences there's no point in getting vaccinated: They claim it doesn't work and it's dangerous.
But, the false information is deeper and far more global than far right media. There are too many Internet quacks with awesome audiences sitting at their kitchen table or inside their cars screaming into their cameras scaring the kajeebees out of everybody. The Info-War's wannabees insist Fauci and Bill Gates have conspired to control the world by producing a false pandemic so that transistors can be embedded to all of us to reduce the world population and for world dominance.
You think I’m kidding? This stuff is prolific. It’s on video, on social, on the tube. It’s everywhere.
The conspiracies are part of the overall proposition that the vaccine is proof of the “Great Reset”. Credentialed experts are gaining greater Internet followings by pushing the idiocy envelopes. They’re sitting in hearings claiming vaccinated people can stick spoons to their foreheads because vaccines made them magnetic.
Some of the objectors claim they're not taking the vaccine because it only has FDA emergency approval. Yet they cried conspiracy when the same FDA, the WHO, the former Trump coronavirus task force insisted the controversial Hydrox was dangerous and ineffective. Amazingly, they argue that the doctors, the hospitals, the government, the World Health Organization, the FDA, Fauci along with the Chinese are killing people to help Big Pharma “make bank”.
Their resistance to the covid vaccine has become a patriotic battle cry. They simply won’t do what the "Big Brother Government" tells them to do.
There’s a deadly pattern. They refused to wear masks. They opposed covid testing, refused to socially distance themselves, and refused to trace their contacts. Recently, Republican leaders are telling them that Biden wants to knock on their door and shove the vaccine down their throats while confiscating their guns. Many of these same people believe Donald Trump's claims that the election was stolen and that the Capitol riots were committed by the FBI, BLM, Antifa, and I suppose, Hunter Biden.
So, it’s no wonder that last week Joe Biden bumbled his way blaming social media for killing people. The reality is, it’s not social media who are the heavy hitters of make-believe. They are not perfect, far from. But, they have bellied up when the country was tearing itself apart. They ripped Trump’s megaphone (and those belonging to others) who spread false allegations of voter fraud that resulted in the January 6 coup of misled "patriots". The social media giants took down many of the looney falsities spread by covid conspiracy theorists who simply repeated mindlessly. Unfortunately despite social media’s removing content that was endangering all of us, the Marjorie Taylor Greene’s of the Trump Party continued to spread those Qanon frauds which still propagate from podcast to podcast to willing believers.
Sadly, they claim they are protected by free speech. Many of them have no problem with Trump bombing us with trillions of bits of combustive lies. They never question whether a president or now, an ex-president should vet wild claims before posting or spreading. But truth and accuracy has never been the mission.
There is no surprise that a full 64% of people who believe Biden won because of voter fraud also have not received a vaccine dose (according to the latest Monmouth poll). So many of the same folks who claim a president can say whatever he wants, regardless of whether there is a shred of reliable facts, also don't take the vaccine. Even if his or their assertions are unsupported by any reliable information, they claim anything they say is protected by the US Constitution. They don't care that our Capitol was invaded by the angry supporters who believed the same messages. But when Mainstream media would get a fact wrong, they almost always sang a different tune. Invariably, they would scream FAKE NEWS. Then, they would demand that the media wrongdoers should have their licenses pulled or their pens revoked.
Bill Cassidy, a doctor and senator, should reconsider his statement on Fox Sunday as he spread incorrect information and inaccuracies. Biden should rethink the accusations he made about Facebook "killing people". Many Americans should read the First Amendment. The constitution does not protect people’s right to spread total falsehoods and lies that are said and repeated knowing that the words will directly and absolutely cause death or destruction. The constitution does not compel private forums the obligation to allow content the forum owners know will cause harm to others.
America, the great experiment, is sick. It needs its own vaccine. Our country suffers from a man-made disease caused by noxious gas lights. It’s virus is spreading like a California fire. All of us have been victimized. Based upon false beliefs, good people have spoken up loudly and passionately. Sadly, they have offered very few solutions while refusing those they are told not to trust.
Therein lies our grave infection inflicting us all.

Your thoughts? Tell us below
Read 1734 times Last modified on Tuesday, 20 July 2021 14:48
Tweet
Published in Donald Trump news
Tagged under