and behold, the false prophet and grand inquisitor roger no-goodell made his pronouncement from on high, and at that moment as the lightning and the thunder came and fell upon the city, the city rose up and shook their fists at the grand inquisitor and said, screw you goodell. we survived the feds and katrina and prevailed, you pissant. screw your scapegoating us for the good of your corporate image. we will not go quietly, and when we come hell's coming with us.

The NFL, after deliberating over what is now called Bountygate has announced Wednesday that New Orleans Saints coach Sean Payton will be suspended for one season without pay for his involvement in the team's bounty program. Former defensive coordinator Gregg Williams has been suspended indefinitely.Saints general manager Mickey Loomis has been suspended for eight games.

The National Football League owners and executives convene their annual meeting next weekend in Palm Beach, Florida, but my guess is they will dispense with their most visible old business before they board their private jets. Who Dat Nation has been waiting anxiously the past few weeks for Commissioner Roger Goodell to drop the hammer on their favorites since revelations of Bountygate were made public.

According to ESPN, Peyton Manning’s new home will be Denver Broncos “barring a snag during intensified contract negotiations that have commenced under the instruction of the four-time MVP to his agent Tom Condon, according to multiple sources.”

Should the deal be consumated, the Broncos could be buying an older injured Colt in place of  young Bronco and healthy.

In the first of those decisions, Oliver v. Magnolia Clinic, the majority told the lower courts that “trial courts and courts of appeal are bound to follow the last expression of law of the Louisiana Supreme Court.”  In this case, the lower courts had not.  The opinion went on to revisit its reasoning in a prior case to remind the courts of their obligation to follow the latest expression of law regarding the constitutionality of the state’s $500,000 cap on medical malpractice claims. 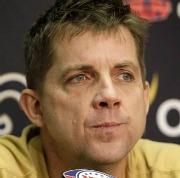 March has been the Saints' cruelest month

For the nascent Nash Roberts wanna-be’s in the room, March blew in like a lion for the Saints. Even the late WWL weather  legend would have donned two layers of hurricane gear after the NFL’s revelations that America’s latest darlings had sullied the integrity of the game with the Bountygate scandal. Whether March goes out like a lamb or the franchise is chased into April by a veritable pack of wild beasts will be up to Commissioner Roger Goodell’s impending sentence. Until then, it is almost like watching one of the Saints’ less proficient games of recent vintage, such as at Tampa Bay or at San Francisco.

The New Orleans Saints knew they were going to lose All-Pro guard Carl Nicks and they planned to replace him with another All-Pro guard, Ben Grubbs, which they did today.  They signed him to five-year, $36 million deal,  including $10 million signing bonus says Adam  Schefter of ESPN.

Saints quarterback Drew Brees said he hopes not to miss any work with the Saints and made it clear that he is uncomfortable working under the franchise tag.

Brees spoke to the AP by phone from San Diego. He is conducting interviews this week as part of his promotional work with Dick's Sporting Goods. He was interviewed on the "Mike and Mike Show" and the "Dan Patrick Show," drawing national interest.

Drew Brees is making New Orleans Saints fans pretty nervous these days.  It's bad enough that the team lost All Pro Carl Nicks offensive lineman to a team it will play twice per season, the Tampa Bay Bucs and that Robert Meachem is now a San Diego Charger.

But, according to rumors flying around the Internet, Brees wants 23 million and the Saints are at 18 and if he doesn't get what he wants, he will hold out.  Can anyone spell Bobby Hebert, the former New Orleans Saints darling QB who spent a year out of football and donned a n Atlanta Falcons helmet after not getting what he wanted.

Drew Brees is making New Orleans Saints fans pretty nervous these days.  It's bad enough that the team lost All Pro Carl Nicks offensive lineman to a team it will play twice per season, the Tampa Bay Bucs and that Robert Meachem is now a San Diego Charger.

But, according to rumors flying around the Internet, Brees wants 23 million and the Saints are at 18.

Louisiana is going to school over education reform.

Governor Bobby Jindal has made education his top legislative priority.

He has travelled the state pushing his ideas and making sure that the signature legislation passes.

Published in Latest Buzz
Tagged under
Read more...
Page 88 of 100