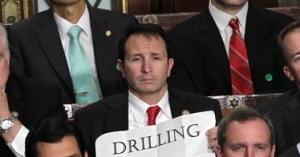 I am sure the Louisiana voters are all torn up over Governor Bobby Jindal's statement that he will not enter the US Senate Race.  Jindal made the statement on Monday when he appeared before the Baton Rouge Press Club.  Not that there is much room for him to run, given that the Republicann field is getting busier every day and with the state political class waiting for Treasurer John Kennedy to enter the field.

Jindal also said he did not have any plans yet when he returns to the private sector.

Of course, one might want to ask if, after he leaves office, will he start campaigning for a GOP candidate for President, so, he could get a national job.  Of course, he would be doing this all on his own dime and perhaps, cash he still has in his political accounts.

Mary Landrieu has been asked to serve on CASA board, an organization to help abused children.   How is her new gig as a Lobbyist?  Here is the interview from Bloomberg

CNN Republican Debate Preview: THIS FROM PREDICTIT
With just several hours left until the next Republican debate, traders on PredictIt are already picking winners and losers. As ofTuesday morning, traders are largely expecting either Donald Trump or Ben Carson to see the worst polling decline following the CNN debate, with shares trading at 49 cents and 36 cents respectively. When asked who will win Tuesday night’s GOP debate, traders appear to be more divided. Both Cruz and Rubio, at 31 cents and 27 cents, are expected to see the biggest polling bump. In third on this market at 17 cents is Chris Christie, who qualified for the debate’s main stage following a recent uptick in the New Hampshire polls.

We must do everything in our power to ensure terrorists dont hijack social media for their radical objectives. House votes on #HR3654 today.