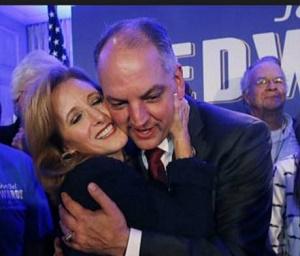 The theme for the 2016 inauguration is “Louisiana First.”

On Monday, January 11, 2016, Gov.-elect Edwards, the Edwards family and friends, and other guests will participate in a mass at St. Joseph Cathedral in Baton Rouge. Members of the Louisiana legislature, including new members, various Louisiana elected officials, and local dignitaries will also participate in the mass. The mass will be officiated by The Most Reverend Robert Muench, the Bishop of the Roman Catholic Diocese of Baton Rouge. In addition, Bishops from around the State of Louisiana have been invited to concelebrate the mass. The pre-inauguration mass is for invited guests only.

Following the mass, Gov.-elect Edwards and Mrs. Edwards, along with their children – Samantha, Sarah Ellen, and John Miller – will participate in the inauguration ceremony on the steps of the Louisiana State Capitol. The Inaugural Ceremony will begin at 11:30 a.m. Gov.-elect Edwards will take the oath of office at 12:00 p.m. While there is reserved seating for invited guests, elected officials, and local dignitaries, the general public is invited to the swearing-in ceremony in the general admission area at the Capitol Complex.

On the evening of January 11, 2016, an Inaugural Ball will be held at Celtic Studios in Baton Rouge, Louisiana. Ball admission is by invitation only. Invitees will include elected officials, local dignitaries, and friends and family.

• Mickey Mangun, of the Pentecostals of Alexandria in Alexandria, LA, will perform during the inaugural ceremony. Mrs. Mangun is an acclaimed performer who has shared her talents on the national stage, including performances at Presidential Inaugurations.

• A 19 round volley of cannon salute will be provided by the 141st Field Artillery Battalion, of the Louisiana National Guard hailing from New Orleans. The 141st is part of the 256th Infantry Brigade of the Louisiana National Guard. The 141st Field Artillery Battalion is the oldest continuous Field Artillery unit outside the original thirteen colonies. It was federally recognized in 1838, and saw its first combat during the Civil War. The 141st deployed to Iraq in 2005 and 2010. The 19 round volley is authorized by Army Regulation 600-25, Salutes, Honors and Visits of Courtesy. 19 Volleys are associated with the recognition of State Governors.

• A flyover is being performed by the 159th Fighter Wing of the Louisiana Air National Guard. The 159th is located at Naval Air Station Joint Reserve Base New Orleans. The aircraft participating are F15C Eagles, Air to Air Superiority Fighters. The 159th was the first Air National Guard unit in the nation to fly the F15 and dates back to WWII when it was the 122nd Observation Squadron. It was federally recognized and activated at New Orleans Army Airbase on March 2, 1941, and served the European Theatre and North Africa, earning eleven battle streamers. The "Four Ship Flyby" will be commanded by Colonel Shawn Coco, 159th Fighter Wing Commander and a graduate of Louisiana State University.

More in this category: « You're on the short-leash, Governor-elect, Jon Bel Edwards New Orleans reconstructs those monuments of a confederate history »
back to top