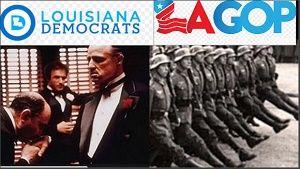 Abramson’s decision to back the Republican has been blasted by New Orleans and other democrats, to the extent that, the local party has considered condemning the vote in some way.

New Orleans Mayor, Mitch Landrieu even had this to say about Abramson’s vote, “"inexplicable."

Abramson, in a statement he posted on twitter, defended his actions.  Basically, he contends that he did not cause Leger to lose and that Leger should have dropped out of the race when he realized he could not win after the first vote.  Abramson likewise claims that he is in the best position within the New Orleans Democratic delegation to communicate with the new republican House Speaker now since he voted for Barras on the second ballot.

Personally, I believe Abramson’s decision was dubious.  I have no idea why he would think he could beat Leger who had very strong support in the Democratic Party and the governor.  By running against Leger, it sent a message to the House that it would be ok to back the Republican.  If Abramson felt Leger did not have the votes, he could have backed a republican on the first ballot rather than voting for himself in the first round.  The action, whether justified or not, looked selfish and then vindictive and exposed a scab of distrust within the local Democratic members of the House of Representatives.

However, Abramson’s behavior this is not the point of this column.

More important is the hypocrisy that the Democratic Party leaders, whether the local group or the state, is condemning Abramson for following his beliefs, even if those beliefs are wrong-headed.   The entire controversy is mindful of Republican gubernatorial candidate Jay Dardenne’s support of Jon Bel Edwards after the open primary in the fall of 2015.  Edwards bested Vitter, Scott Angelle and Dardenne in that first round and Dardenne decided that voting for Vitter would be too much to stomach, thus, publicly endorsed Edwards.

Boom.  Thunder blasted and lightning struck to evidence the republican party disgust.  The Republican Party, Chairman Roger Villere (and even Reince Priebus of the Republican National Committee) came out of the cloud and lit up the sky with anger, basically calling Dardenne’s endorsement traitorous. “How dare Dardenne back a Democrat?”  Other party leaders called Dardenne “Benedict Arnold”, a “turn-coat” and other such niceties as if Dardenne committed some high-crime or misdemeanor.

Back then, many in the Democratic Party and Edwards supporters condemned the strong-arm tactics of the Vitter and republican camps for slamming Dardenne for following his own conscience. Even more recently, the Republican Party and its allies have been threatening members of that House delegation for not backing a republican for the same House seat.  This type of hand-twisting has not gone unnoticed by democrats and pundits who have called out the party leadership for smacking those wavering members with Mafioso-type death kisses.

Now, some Democrats are doing the same with Abramson.

Whether Dardenne or Abramson (or Republican House members wanting to vote for Jon Bel Edwards) did the right thing for the party or not simply isn’t the question.  The issue is this repugnant coercions to adhere to strict party loyalties, the threats against those who do and the condemnations against those one fail to kiss the party’s leaders’ rings.

If we are going to criticize republicans for castigating Dardenne’s decision because it eviscerated party unity, if we are going to turn up our nose when republicans and their allies turn the screws on those who follow a different light, we surely can’t give the Democratic Party a pass for their treatment of Abramson.  What’s good for the republican goose is great for the democratic gander.  If voters want to take action against those party members who stray, that’s their individual choices. But, when political organizations feel the need to excommunicate those who don’t walk lockstep, it’s time to speak out, smell the dictatorial abuses and call out the hypocrisies.