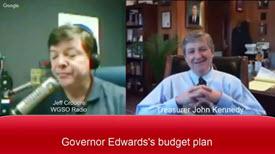 Here is a rough overview of Treasurer Kennedy’s interview.  Below is the radio interview which, we suggest you listen for accuracy purposes.

Budget is in bad shame, not else is new.. Louisiana has insisted to spend more than it takes in.

He is suggesting a penny sales tax which would make Louisiana the highest in the country;  also raising income tax..

He claims the sales tax would be a bridge, without termination—800M would be raised special session.  Income tax, unclear.  Talking changing rates.

I don’t favor any of these increases.  We have moral obligation to got control of spending.  The governor’s proposal is not going to do anything about consulting contracts, we have too many generals not enough soldiers.  I suggest, we get rid of many of statutory dedications, they just want to cut them.  I would go and whack some.

The NGO’s are still in the budget, lot of NGO’s have moved over in different departments and have become consulting contracts

We would be dipping into the rainy day funds and some of the BP money.

We would be dipping 130 million from rainy day fund, doesn’t bother me, that’s what’s for.  Want to take big chunk of non-coastal restoration of BP money.  That BP money has been earmarked for healthcare and for the elderly.

Maritime industry is hurting because of oil and gas;  One businessman in that sector told me if they change inventory tax, it will cost me ten million a year and I will go to Houston, can move boats and will move to Texas.

We don’t think we deserve this (referring to the plan to solve the budget crises).

I know the status of budget but I know we did not get here because of spending.  I don’t think we are one tax increase away from prosperity.  This has got to be passed by legislature and some cases, by 2/3 votes.  and voters need to

I think voters know we have to take control of spending and don’t want to give money away until they know all cuts have been made.

(Responding to a recommendation from Crouere), The Grace commission   we would need to bring in a lot of folks from outside We did it in 1995 and streamline commission recently but we got to depend upon mainstream media to support it, but biggest problem is getting something done about it.  Governor Jindal did not accept recommendations, we spent thousands of hours producing about 300 recommendations and he ignored almost all of them

Everything on table, I don’t see cutting on the table..they see cutting statutory spending..but they will just spend different place

According to the CMS testimony, about ten percent in cost in Medicaid is fraud about 900 million dollars and if we got serious about combatting fraud, that’s 1/4th, 250 million.  Nobody  is serious about combating fraud.  Government delayed work requirements for able body people.  “Get off your butt and do something”.

I like Governor Edwards, I really like him but this is going to tank our economy, I don’t think this is what (they expected when they voted for him.

(Responding to question about ethics payment debts) The new Office of Debt Recovery, we owe more than 1.2M in ethics violations payments.  The old attorney general (Caldwell) refused to proceed against those debtors.  I hope the new one does proceed (Jeff Landry).

More in this category: « Edwards proposes tap rainy day, BP and taxes, cuts for Louisiana budget crises Edwards plan full of taxes, too soon but Jindal should be blamed for budget crises »
back to top