Edwards plan full of taxes, too soon but Jindal should be blamed for budget crises 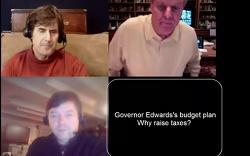 Any time you discuss taxes, you can bet the discussion will turn emotional.

It did Tuesday night, hours after Jon Bel Edwards announced his plan to raise taxes, utilize funds from various sources and cut government spending—all to plug a short-term hole of roughly $750 million dollars for the existing year and $1.9 million for the following year, which fiscal period begins July 1, 2016.

Jeff Crouere, Jim Brown and I talked online about the plan and if there was any agreement, it is that we are involved in a major crises that occurred under Governor Bobby Jindal and the legislature and that the crises runs the high risk of worsening with the oil prices dropping fast.

Here are the major positions in this segment of the discussion:

Edwards is shooting from the hip.  He has been in office for one week and has offered a scatter shot approach, not a concrete plan.  He is recommending not just raising taxes, but a significant amount in taxes and if we raise the sales tax another penny, we will have the highest sales tax in the country.  What type of message does that send?  Edwards moved too quickly and is throwing out is plan to see what sticks.

We need to tone down the taxes.

Treasurer John Kennedy says we need to reduce consultant contracts, consolidate higher education. We have too many campuses, too many boards.  There  might be consensus to raise other types of taxes, certainly not sales taxes.  Just got blast from Paul Hollis.  Republicans are hard pressed to support this.  Governor has not run on this, crises worse than what he thought, big problem to just tax.

SABLUDOWSKY: Jindal’s budget, that he said was balanced, is 1.2 billion out of balance.  We don’t have time to smoke a cigarette, we have a government that is going to crash, so how do we deal with this now, you talk about education, that is great for long term, do we shut them down?  We have short and a long term problem.

BROWN: My concern is we have  four and a half months to the end of this budget year and Edwards puts out a plan in one week, just seems to me, here are four items, item after item, just thrown out.  Just too much.  You take advalorem tax, a huge problems, all kind of tricks are being spent.  Ad valoren tax on inventory, I hear what you are saying, you can’t sit back, but to do it behind the hip, number of business groups not consulted.

Would prefer to get rid of exemptions, credits, lower tax rates and get rid of special deals

Need to look at the rainy day funds, other funds needs to be looked at, so I think it is way to restructure government, consolidating departments, and a real streamline is needed.