Would MLK think his dream turned into a nightmare? 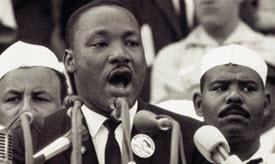 by Ron Chapman
“...And I've looked over, and I've seen the Promised Land. I may not get there with you, but I want you to know tonight that we as a people will get to the Promised Land. So I'm happy tonight. I'm not worried about anything. I'm not fearing any man.”

This haunting statement was made by Dr. King hours before his untimely death.   It is as if he knew something was about to happen and prepared his followers for the event.  Informing them that he saw “the promised land” and that he “…may not get there with you” but that he was “happy tonight” and he was not “fearing any man.”

Martin Luther King was an amazing leader.  He refused to employ violence as a tool for change despite the fact that on too many occasions violence was employed against him, his followers, and his noble cause.  In his words: “Man must evolve for all human contact a method which rejects revenge, aggression, and retaliation.  The foundation of such a method is love.”

Further, he stated that: “Returning violence for violence multiplies violence, adding a deeper darkne
ss to a night already devoid of stars.”

Was he angry about the discrimination African-Americans endured?   Certainly! Did he believe America had failed to live up to its dream and underlying philosophy that “all men are created equal”?   Absolutely!  Did he demand change? Yes!  But he never allowed hate to infect his thought process.

His death and that of President John Kennedy provided the necessary momentum to bring about that change.   Their bones laid the foundation for the Civil Rights laws of the 1960s.  Which came a full 100 years after the close of the Civil War and the constitutional amendments committing the nation to civil rights and the right to vote.  It is indeed a sad legacy of delay.

Thus, it is right that we celebrate Dr. King’s life and legacy because he is truly a “Founding Father.”   He did for civil rights what Washington, Hamilton, Madison, and Jefferson achieved in the framing of our democratic government.

Our Declaration of Independence and Constitution were not statements of fact, but dreams to be achieved.  The process is fluid and always in a state of flux as it seeks equilibrium between the power of government and the rights of citizens.  Jefferson insisted on a Bill of Rights; King demanded that it apply to all people.

What is sad today is the crisis in the Black community.   It has been 48 years since Dr.King’s  “I Have a Dream” speech and his later assassination and when we look at where the situation stands today, one wonders…what he would think?

Granted, the quest for “civil rights” has been advanced, but problems persist.  What of persistent poverty?  Disproportionate distribution of wealth?  Remnants of racial discrimination?  Unequal application of justice?

Additionally, how would Dr. Martin Luther King respond to the destruction of the family?  How would he react to the deaths of hundreds of thousands of young Black men at the hands of other young Black men in those 48 years?  What would his judgement be of the Welfare system that was intended to support the poor, but has instead trapped a disproportionate number of African-Americans in a multi-generational cycle of permanent poverty?   What would be his reaction to misogynistic and violent “Gansta Rap” that has become the cultural mainstay and model for a generation? Does it not present a distorted sense of attainable achievement?

Would Dr. King not wonder why so little attention is payed to the true achievements among African-Americans in the political, social, economic, cultural, and educational fields while focus is solely concentrated on entertainment and athletics?

There is no doubt that America has deprived Black America of its proper place in the national experience.  The evidence is abundant.  But there is also something to be said about the lack of incentive among some to embrace those opportunities that do exist.

In other words, were Dr. King alive today and once again have a moment to make a bold statement to America before the Lincoln Memorial…what would he say to ALL of us?

Ron Chapman is a columnist, businessman and university instructor

More in this category: « How New Orleans has changed our history, future Marc Morial: I won't watch the Academy Awards this year, here's why »
back to top