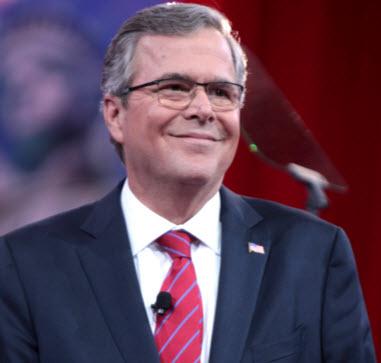 The results from Iowa were certainly interesting. On the Democratic side, Hillary Clinton and Bernie Sanders virtually tied, giving both campaigns some momentum going into New Hampshire. Whereas, the laughable, struggling Martin O'Malley finally decided to end his ridiculous campaign after getting less than 1% of the vote in Iowa.

Also, on the Republican side, ending his campaign was former Arkansas Governor Mike Huckabee, who hoped to recapture the magic of 2008 and pull off a miracle upset in Iowa. It did not happen for Huckabee and at least he had the good sense to quit. The same can't be said for former Florida Governor Jeb Bush, who finished a pathetic sixth place among Republican voters, yet vowed to continue the fight in New Hampshire and beyond.
Last year, Bush was the overwhelming favorite to win the nomination. He is part of the Bush dynasty as his father and brother served as President, so he had a tremendous built-in advantage. He enjoyed easy access to the wealthy, establishment donors who control the Republican Party. These power brokers flooded his campaign with massive donations, allowing Bush to establish the early lead in the polls and in the important category of fundraising.
It soon evaporated as Bush tangled with Donald Trump in the debates and was labeled both stiff and "low energy." Throughout his campaign, Bush has failed to connect with Republican voters looking for action on the important issues of the economy, illegal immigration and the fight against ISIS.
The end result was his uninspiring performance yesterday, where he finished in sixth place with only 2.8% of the vote.
In fact, Bush wasted almost $15 million in Iowa to garner just 5,165 votes, spending as astronomical $2,884 per Iowa vote.
His horrible showing reflects the desire of Republican voters to move past the Bush family and find new leadership in the party. Voters must realize that Jeb Bush is a creature of the much despised Republican establishment and, if elected, would not do anything to fix the real problems facing the nation.

Bush's anemic level of support was the best result of the Iowa election. It places his campaign on life support going to New Hampshire and makes his nomination very unlikely. Of course, this is all bad news for the Democrats who were looking to coast to victory in November if the Republicans nominated another Bush.
With the top three Republican candidates in Iowa being Cruz, Trump and Rubio, voters sent an unmistakable message to the GOP establishment that it is time for new leadership. It is also the only possible way for Republicans to have a chance of recapturing the White House in November.