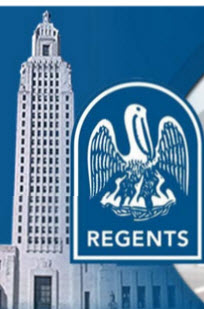 The shoe continues to crop as the Louisiana Commissioner for Higher Education has released an email that underscores the seriousness and severity of the disruptions that are expected to occur due to a major budget crises hitting higher education:

Louisiana’s Commissioner for Higher Education says colleges and universities across the state are bracing themselves for drastic budget cuts that could potentially devastate higher systems and destroy local economies. In a recent letter to the Division of Administration, Commissioner Rallo outlined several immediate impacts which would occur if budget reductions are not reversed.

This includes:
A significant number of faculty and staff who will be laid off, leaving institutions to suspend classes during the spring semester and issue incomplete grades resulting in the cancellation of May graduation on campus.
All campus construction projects will immediately cease.
The impact of lay-offs, students leaving campus and loss of payroll will have severe economic impact on every community served by our institutions.
The ability to prepare students for those high demand, high wage jobs currently available and those coming to Louisiana will be reduced by over 75%.
The reduction in the Taylor Opportunity Programs for Students (TOPS) funding by nearly 80% will require every student now in high school to bear most if not all of the cost of attendance to college. Students currently enrolled will have their TOPS award dramatically reduced or eliminated. This means that many students will be unable to attend college due to the inability to fund their education.
Division I rules require grades to be issued to students who seek to be eligible for fall sports. Since only incomplete grades will be issued during spring semester, no student will be eligible for fall sports. This means that all athletic events will be cancelled for fall 2016.
“Should worst case budgetary reductions occur, outcomes ranging from lay-offs to closures are inevitable,” said Rallo. “We are hoping for the best, but preparing for the worst.”

This session, Louisiana legislators will publicly decide if higher education is a priority by finding solutions to Louisiana’s fiscal problems that are both significant and sustainable for higher education. One program that has been specifically targeted for drastic cuts with serious implications is TOPS. TOPS funding is slated to be reduced by approximately 80 percent for FY 2016-2017, with only $65M projected to be allocated from tobacco funds. This means that most students who are anticipating TOPS may be unable to receive the award, and students who are currently receiving TOPS may have their award dramatically reduced if not eliminated. Regents states that TOPS awards will not be disturbed for the current award period.

As the dismal fiscal state of Louisiana intensifies, so does its impact on higher education, with dire warnings from regional and national regulators. Louisiana higher education recently received notification by the Southern Association of Colleges and Schools Commission on Colleges (SACSCOC) the regional accrediting body for public, private and for-profit institutions in southern states, conveying their awareness and concern of the financial challenges that Louisiana higher education is facing. The letter states that if solutions are not found and institutions cease operations before the end of the current semester, the following could occur: (1) students would not be able to complete classes and, subsequently, earn no credit for courses taken this semester, potentially impacting their financial aid eligibility, and (2) payroll will not be met and bills would not be paid placing employees in an untenable financial situation as well as negatively impacting the credit ratings of the institutions. If institutions are unable to demonstrate continued financial stability or continue to enroll students, the Board of SACSCOC would have to consider a public sanction of the institutions or a withdrawal of their accreditation.

The Board of Regents believes that should this action occur, the short-term and long-term effects on Louisiana higher education and this state would be irreparable.

Louisiana is currently leading the nation as the state that has the greatest level of disinvestment for higher education, and with an anticipated $943M shortfall for the current year and a $2B shortfall for FY 2016-2017, Louisiana will continue on the same trajectory of remaining last on every list.

As a result of the Revenue Estimating Conference’s budget projections earlier this week, higher education’s portion of the cuts in state funding have risen to an estimated $205M for the current fiscal year which ends June 30th, and another detrimental round of cuts of approximately 180.3M for FY 2016-2017 for higher education entities.

Additionally, higher education leaders have been keenly focused on efficiencies consisting of program reviews with recommendations for elimination and consolidation, reducing university personnel by almost 5000, and consolidating and streamlining operations. “We cannot continue on this path for the sake of higher education nor our state,” said Richard Lipsey, Chairman of the Board of Regents. “It’s unfair that we’ve shifted financial burdens from the state to our students. Our students, faculty, staff and citizens deserve better. There is no such thing as cutting our way to excellence, and our legislators need to send a clear message to constituents that they believe in Louisiana. This can only be done by finding the necessary budgetary solutions to rebuild and restore higher education to an enterprise that we all can be proud of.”

The Board of Regents will continue to engage constituents across the state through scheduled public forums, media tours, and a budget update webpage with a newly created platform for stakeholders to submit questions relative to higher education. Also scheduled is Higher Education Day at the Legislature, set for February 24, 2016 - Details are forthcoming.

“Engagement is key during both the special and legislative session,” said Rallo. “We are already receiving correspondence from citizens who are deeply concerned about the future of higher education in Louisiana, and we pledge to keep them informed.”