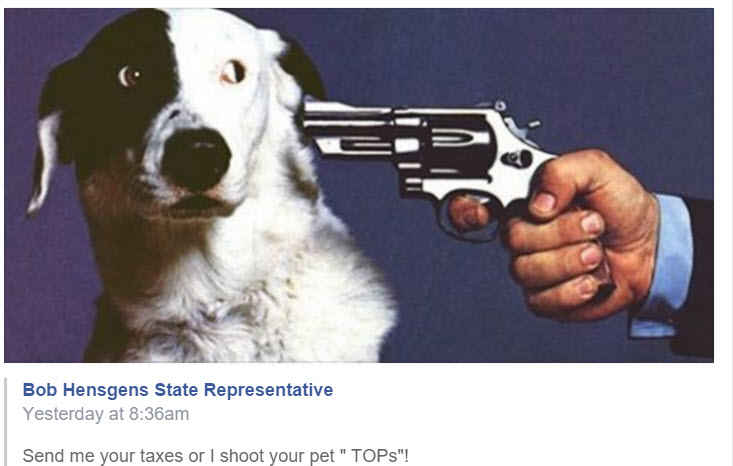 My new motto for Louisiana: Kill LSU, Save the Tigers.

This is how i feel right now after two days of hysteria by meaningful people who love this state and who believe they have solutions that will work to make Louisiana better.

Then, there are others whose candidate lost an election and control of the mansion and the 4th floor of the Capitol in Baton Rouge.  Many of them want to divert us from understanding how we got into this fiscal mess and blame the messenger who has the responsibility to help us return to normalcy.

Ever since Governor Jon Bel Edwards's TV speech, Thursday night in which he attempted to explain the horrible budget condition and the possible consequences, the tone has spun into a different narrative, altogether.

Edwards, the new Louisiana Governor, who has now been in office for one month, is being targeted by these people for obvious reasons.  The answers they offered to the State of Louisiana have failed and they refuse to own up to that fact.  It is too easy and much more fun to forget realities and attack the vulnerable, as long as they win.  Worse, they seem to be giddy over the idea that this governor is having difficulty.  I assume many of them have already signed a petition to recall the governor floating around social media, or will consider doing so.

Also, they are either intentionally misleading the public or engaging in gross negligence in trying to get their way.  They are suggesting in Internet mimes and through other media means, that Edwards is putting a gun to our heads--"pass my taxes, or the dog is history".

How untrue.  How false.  How pitiful.

Instead, the governor is essentially saying, "I'm being honest, something others have not done, which is why we are in this mess.  Right now,we're out of food and if we cannot feed this dog ASAP, he will perish."

But, OMG, in making this case, he mentioned, LSU Tigers, or perhaps implied them.

So, now the mantra, apparently spawned and promoted by this crowd is to claim that Edwards is holding LSU Tigers hostage.

Funny, I don't recall ever hearing the governor say, "Give me my taxes or the Tiger is dead".  Nor do I remember him claim that he was not going to consider other ideas and options to make it work.

What did he say?

"If you are a student attending one of these universities, it means that you will receive a grade of incomplete, many students will not be able to graduate and student athletes across the state at those schools will be ineligible to play next semester. That means you can say farewell to college football next fall."

Nor did he say, I will tax you and not cut.

For starts, he acknowledged he must make cuts.  He said, "First of all, I am proposing significant cuts, including a hiring freeze across state government, a reduction in state contracts, and I'm making more than $160 million in cuts to state government spending."

Can he cut more, should he cut more?  Hopefully yes.  As I previously mentioned, how about starting with cutting elected officials state salaries by 30-35%, so they can lead by example.  Let's see how fast our legislators dog that option.

The truth is, other than his creating an executive budget, it really is up to the legislature to bring home the numbers.  The legislative call, the governor recently issued for the session starting tomorrow,  is broad enough to make dramatic changes to the way Louisiana does business.  Among other ways to get this state out of this pickle, the Republican legislators can slash government, reduce the income tax rates and brackets, reduce tax credits that aren't producing revenues for the state, change the statutory dedications, the Budget stabilization fund, repeal the bogus SAVE ACT credit their party gave Jindal so he could keep his anti-tax pledge, modify the business taxes, the franchise tax, exemptions and exclusions and yes, Treasurer Kennedy, the state contracts (including the five million or so his own office has contracted). (Read the governor's call)

The republican-controlled legislature have the tools here to make major changes to the way we do business in the state, even if they never once have cited the budget call to point out these facts.

Instead, they choose to pretend that their dog is under fire and their tiger is at the governor's mercy.

Give me a break.

There are others who might not be in this same mindset of those who engage in the war of politics for a living.  They are angry, have a right to be so.  They are also sometimes very misguided by emotions, not facts.

Last night, I watched one of these individuals, someone i greatly respect for his love for the community and for his contributions, give fodder to those who I believe simply hate the Governor, his party and the issues they represent.

This sportscaster issued an editorial blasting the Louisiana Governor for referring to the LSU Tigers football season in his speech, Thursday night.

However, he said that since Edwards tried to scare Louisiana, the Governor has lost credibility.

I am absolutely not going to defend Edwards in some areas.  Sometimes, I think, this relatively soft-spoken man is too polite and does not defend himself as well as he can or should.

Also, some of his policies have been inconsistent and I have criticized him when I felt it was warranted.

But, I surely take umbrage with what I saw last night and what I have been witnessing from those who want to win and want to destroy, regardless of cost to the State of Louisiana.

Thus, I wrote this letter to the sportscaster and to the station.  I am slightly modifying the letter here to hide their identities.  If they choose to respond publicly, that would be their call.

THE LETTER TO THE STATION:

First, before going any further, I know I am biased.  I hold Jindal and his enablers primarily responsible for the horrible budget mess Edwards has inherited and we are now suffering.  I do take issue with the attack made on the current Governor's credibility, however.

The sportscaster said that JBE hurt his own credibility for making the statement about LSU football.  Sportscaster said it would never happen, that Edwards knows this, so therefore, the Governor's own credibility is at issue.  This is particularly pointed because we all know of the statements he made about his honor code.
And while the sportscaster said he was not making a political statement, he played right into the political hatred by those upset that Edwards was elected and those who have been calling him a liar--without any proof whatsoever, and when challenged, they still provide no proof, yet, continue making the charge.
Maybe Edwards made a political mistake for making the reference to football.  But, I believe, had he not done so, he would have been negligent.
Yes, negligent.
In the video interview i did with ED Chervenak of University of New Orleans today, we discussed the  football statement.
http://www.bayoubuzz.com/bb/item/1061459-a-governor-edwards-scare-tactic-lsu-tigers-at-risk-inside-view-uno-s-dr-chervenak
In particular, this is what he said,
"ED CHERVENAK: We have to remember that LSU is a University first, the needs of students first, and they are athletes second and if it comes to this doomsday scenario we won't be able to pass students from this semester on to the next semester is just impossible because it won't have the accreditation, they want the grades. The football program is basically self financing. Les Miles salary doesn't come out of the state budget, it comes out of the athletic budget and all scholarships for the football program comes out of the athletic budget would really hurts is all your sports"
This is the precise issue we need to be concerned about as it relates to LSU football and other sports and academia.
After Chervenak made the statement, I thought to myself, that makes sense.
Later this afternoon, I read and published the following:
http://www.bayoubuzz.com/bb/item/1061465-louisiana-board-of-regents-budget-cuts-could-devastate-higher-education-local-economies
In particular, the Board of Regents press release said,

Keep in mind, this is the Board of Regents, an organization not under the control of this governor with a sizeable membership appointed by Jindal.  They notified the administration.  When did they do so?  I don't know.  But, do i think they discussed these concerns with Edwards administration prior to last night?  Absolutely.

Even assuming they did not, what they are saying is exactly what Edwards was saying, in effect.  Edwards did a bad job in explaining himself and this has not been the first time he has done poorly in that regards.

The fact remains, we are roughly $900M in the hole for just this year.  We need to do something drastic, whether cut, raise taxes or a combination thereof.  If not, because of the way things are structured, higher ed and healthcare, as we know will take the brunt and the scenario described, will be an almost certainty.

Teachers will be laid off, students given incompletes and just possibly, football players not able to move upward to the next grade.

We can argue that the LSU boosters will dig deep and ensure football students get their grades, therefore can play next year.

However, can you imagine the anger and lawsuits arising from other faculty, students and college teams (Including LSU baseball players), who will charge discrimination and unfair business and educational practice?

We have a major problem.  Edwards wanted the job and he must find solutions.  But he also must deal with a hostile political environment.  Since we are talking about credibility, by the way, I am sure you are aware that some of the republican leaders are seriously contemplating calling to end the session after it starts.

They want to try to bring all these issues up during the regular session.  However, the regular session is not a fiscal session, so, they will have a very difficult time raising revenues, which i believe is the reason for this approach.  But, that is not the most immediate issue.  The greatest and most immediate problem is--we need solutions now.  We need to cut a billion dollars or raise a billion or a combo.  By the time they get around to trying to fix the problem, they have made it worst, manifold.  Many of the schools will have already closed or been so compromised that we lose virtually all credibility in maintaining any meaningful higher education program in the future.

Last, we are so quick to complain about how we are always at the bottom.  Just the idea that we are even thinking about putting pigskin over education, which is what I am hearing and reading on social media today is insane.  If our loyalties are to satisfy the fantasies of loyal sports fans over the desires of our kids to get good education and jobs, then, maybe i don't care to live in this state, after all.

More in this category: « US Senate candidate John Kennedy reminds voters his budget ideas Who might be deceiving us? Jon Bel Edwards or the Louisiana Republican Party? »
back to top